The Daily Telegraph reports that:

After years of library membership declining and fears tha 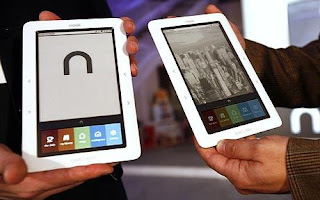 t the public no longer wanted to borrow books, some institutions are reporting a spike in interest since they started to offer e-books.

Only a handful of libraries have started to offer the service, but many in the library world are hopeful that the revolution in digital reading can help transform libraries' fortunes, and that the majority of libraries will soon offer downloads as a matter of course, alongside the latest Dan Brown paperback.

Fiona Marriott, at Luton Libraries, said: "In recent weeks the number of ebook downloads has been increasing fast, and there are people emailing us from all over the country and even abroad asking if they can join as members online."

She said there had been a sharp increase in members, as a result, with more than 250 new users signing up, even though only local residents could join the service. Other librarians agreed more people had become members since e-books became available, though no official figures are yet available.

So far Essex, Luton and Windsor & Maidenhead libraries offer the service, but others including Hampshire, Liverpool and Norfolk are planning to start the scheme.

It works by members of libraries logging onto a website, either at the library or at home, typing in their library membership number and downloading the books to their computer. They can then transfer those books onto their e-book devices such as Sony's Reader, iRex Techologies' iLiad or the Cool-er. The only device you can't use is Amazon's Kindle, because the device only works with Kindle proprietary software.

Readers do not need to remember to take their books back on time – a perennial problem for many consumers, because the digital book automatically deletes itself from their machine after 14 days.

"This is an exciting development. These are not going to replace the paper book, they are as well as."

He pointed out that e-books were not only cheaper, because of the lack of wear and tear and thefts, but they also offered great opportunities for older housebound readers. That is because with most devices you can enlarge the font size to as large as you like, which will help people with failing eyesight.

Newcastle, where he is chief librarian, is considering buying some e-book reading devices to lend to older, housebound residents.

According to the department of Culture, Media and Sport, annual visits to the library have declined from 302 million a decade ago to 280 million, with the decline in book loans far sharper.

Posted by Gary Dobbs/Jack Martin at 09:14

The ability to enlarge reading font was a big selling point for me, but the kindle doesn't let it get as large as I'd like.