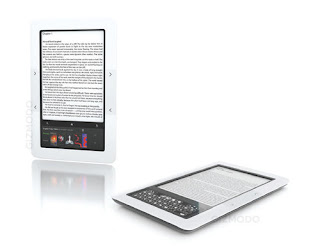 But many people who might become avid e-readers don't own Kindles─because they're too expensive; or too clunky; or because they don't like the many user-crippling restrictions Amazon places on what customers can do with its e-books (you buy them but you don't really own them); or because they don't want to lug around yet another limited use device along with their cell phone and iPod and laptop.

There is a lot of buzz that Barnes & Noble will release its anticipated e-reading device tomorrow. If the usual rumor sites are to be believed, it will have an e-ink screen, like Amazon's Kindle, and it will have built-in wireless so you can buy books over the air, like the Kindle. It may do the Kindle one better with a touchscreen, and possibly Wi-Fi, and maybe some limited way of sharing books with other e-readers.

Maybe it will be better than the Kindle. Maybe it will be pretty much the same. It looks just fine. There is the customary hype over the device─you know, whether it's a "Kindle killer," etc.

But the truth is, as long as it isn't a complete disaster, it doesn't really matter. Barnes & Noble is clearly out to get Amazon, but it's also clearly not counting on this device alone to do it. Instead, while the Kindle, and the Kindle 2, and the Kindle DX have been getting all the attention, B&N has been quietly sneaking up to steal Amazon's lunch.

And this is where Amazon may have gotten itself into trouble. It's a bookseller, not a device maker, and forcing customers to buy the company's reader in order to read its e-books means Amazon has a lot fewer customers for them. Amazon seemed to recognize this, and brought out a decent but stripped down Kindle app for the iPhone and iPod touch. But still, it's a fairly closed universe for customers who want to buy Kindle content.

Meanwhile Barnes & Noble has been doing just the opposite. Instead of trying to convince its customers to lock themselves into a proprietary device, the company has been working to make it so they can buy and read B&N's e-books on devices they may already have in their pockets, or on their desktops. As it is now, you can read them on a Mac or PC computer, iPhone or iPod Touch, or BlackBerry phone. (There have been hints at the possibility of an app for Android phones, but so far it hasn't materialized.) The reader application is free, so there's no need to plunk down hundreds on a device before you can plunk down more money to read on it.

The company has also signed a deal to provide the e-books for the long-awaited Plastic Logic Que e-reader expected early next year. Add Barnes & Noble's own branded device, and customers have a lot of choices. If you want a dedicated e-reader, they've got one. If you want to do your e-reading on a handheld device you already own, or sitting at your desk or on your notebook, you can do that too. All of a sudden, the Kindle starts to fade by comparison. Things could get really interesting if Apple's forthcoming tablet─I know, it's just a rumor─runs both Amazon's and Barnes & Noble's e-reading apps.

If B&N allows customers to swap their libraries between devices and share books they've purchased with others─and they should─they'll attract even more customers. (Don't hold your breath for DRM-free e-books in the short run, though. Publishers are still foolishly demanding punitive restrictions on how their customers can use the e-books they buy, and retailers like Amazon and Barnes & Noble are going along with it. Give it time, though. Just like the music labels did, publishers will eventually wise up once they realize that they're losing customers and leaving a ton of money on the table by shackling their content.)

B&N's strategy reminds me of a great recent piece in Wired by Daniel Roth about Netflix CEO Reed Hastings, who had big plans to manufacture a device that would stream Netflix movies into customers' television sets. But days away from launching the product, he was in fits of self doubt. Something didn't seem right. Ultimately, he pulled the plug on the set-top box and went in an entirely different direction.

Roth writes: "Instead, the company would take a more stealthy—and potentially even more ambitious—approach. Rather than design its own product, it would embed its streaming-video service into existing devices: TVs, DVD players, game consoles, laptops, even smart phones. Netflix wouldn't be a hardware company; it would be a services firm....

"Today, nearly 3 million users access Netflix's instant streaming service, watching an estimated 5 million movies and TV shows every week on their PCs or living room sets. They get it through Roku's player, which was successfully launched in May 2008. (The Roku now also offers more than 45,000 movies and TV shows on demand through Amazon.com and, since August, live and archived Major League Baseball games.) They get it through their Xbox 360s—Microsoft added Netflix to its Xbox Live service last fall. They get it through LG and Samsung Blu-ray players. They get it through their TiVos and new flatscreen TVs. By the end of 2009, nearly 10 million Netflix-equipped gadgets will be hanging on walls and sitting in entertainment centers. And Hastings says this is just the beginning: `It's possible that within a few years, nearly all Internet-connected consumer electronics devices will include Netflix.' "

If that's the sort of thing Barnes & Noble has in mind, Amazon has plenty to fear, and a lot of catching up to do.

Posted by Gary Dobbs/Jack Martin at 05:47

Interesting piece on BBC News last night. The man who owns Dent Bookstores was talking about e-readers. He thinks that the life of the reader will be short lived.
His grounds are - do people really want to lug around another piece of technology along with their laptop, mobile and iPod?
In his opinion Apple will step in with something that will combine the e-reader and iPod.
On a light note my youngest son was watching this piece with me.
'Can you get westerns on them?' he asked.
'Yes.'
'That's OK then.'
'But not Black Horse Westerns.'
'Then it's crap,' he decided.
Then, on a more serious tone, he mentioned: 'This thing needs batteries? Or charging? So, I have to charge my mobile, charge my iPod, charge the battery in my laptop - er - how many sockets do these people think we have?'