When I was a kid Halloween wasn't such a big deal as is it today. We'd often have some fun and games like ducking for apples while blindfolded but that was pretty much it - all that trick or treating was an American thing and although the origins of Halloween are 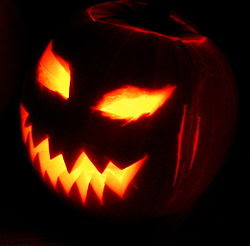 Celtic and seem to have originally come from the British Isles, it was the Americans who were making the big fuss. It's still a massive event Stateside but we have caught up and these days the shops are decorated with plastic skeletons, pumpkins and spiderwebs weeks before the big day.

From the WIKI: The celebration has some elements of a festival of the dead. The ancient Celts believed that the border between this world and the Otherworld became thin on Samhain, allowing spirits (both harmless and harmful) to pass through. The family's ancestors were honoured and invited home whilst harmful spirits were warded off. It is believed that the need to ward off harmful spirits led to the wearing of costumes and masks. Their purpose was to disguise oneself as a harmful spirit and thus avoid harm. In Scotland the spirits were impersonated by young men dressed in white with masked, veiled or blackened faces. 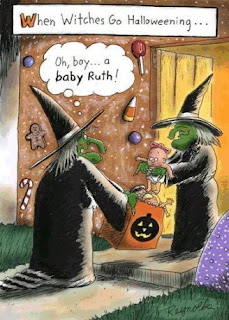 , in the past, had some dim witted chav throw an egg at my car as I drove past. They leave a bloody mark in the paintwork, you know. But for the most part it's a fun event with gangs of young kids going around in costume, special events and horror film marathons on the TV.


Ahh well,Christmas will be next.


NEXT ON THE ARCHIVE - DRACULA...make sure you come back, you'll be fangful you did.
Posted by Gary Dobbs/Jack Martin at 02:36

Email ThisBlogThis!Share to TwitterShare to FacebookShare to Pinterest
Labels: halloween

I love that cartoon. Gave me a chuckle!!