THE AMERICAN WEST BY DEE BROWN 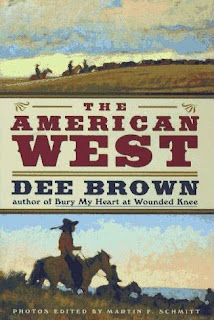 To my mind the late Dee Brown's The American West is the definitive history of the period. Like his Bury my Heart At Wounded Knee, which tells of the American Indian wars, it is an exhaustive and insightful history.

Each of the 29 chapters is compelling and reads with the immediacy of fiction (the skills Brown acquired with his novels serve him well) and the sheer scope covered is as big as the Western Skies themselves. As the author says in his introduction the American West has become a cliche. Academics debate its myths and realities and Hollywood folk put its myths in the popular culture.

This is an essential book for anyone interested in the West and from its pages it shows that the truth was every bit as exciting as the fiction.
Posted by Gary Dobbs/Jack Martin at 14:46

Email ThisBlogThis!Share to TwitterShare to FacebookShare to Pinterest
Labels: dee brown, the americanwest