Any list such as this is bound to be contentious and this is my list of what I consider to be the ten best Wayne western. It will be interesting to know what other Duke fans think.

1 The Searchers - 1956 - Maybe the best western ever made and to my mind Wayne's best movie and director John Ford's masterpiece. It was the 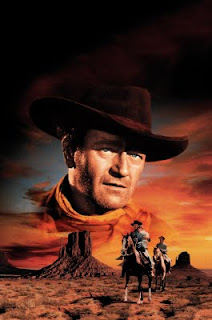 third most successful western of the Fifties, taking $4.9 million.

2 Red River - 1948- perhaps Wayne's most complex performance. Gary Cooper was originally lined up for the lead role but now it is difficult to think of anyone buy Wayne in the role. The film took $3 million and catapulted Wayne into top ten list of cinema stars.

3 Rio Bravo 1959 was a massively successful western, so good in fact that director Howard Hawks remade it not once but twice. It was released in March 1959 and has remained a fan favourite ever since.

4 The Man who shot Liberty Valance -1962 - The Duke teams up with James Stewart and Lee Marvin for this wonderfully melodramatic western which is full of iconic moments.

5 Stagecoach-1939- The film that dragged Wayne out of B-movie hell and made him a box office favourite, a position he would maintain until his death in 1979. The film was a critical and commercial success. From now on Wayne was the screen cowboy. 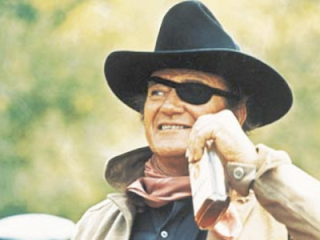 6 The Shootist -1976 - Wayne's last film is a beautiful meditation on growing old and the last days of the West. Wayne plays J. B. Books, an ageing gun slinger dying of cancer. James Stewart, in his last western, is the Duke's doc and even at this advanced age the chemistry between the two starts lights up the screen. And Lauren Bacall is excellent as Wayne's landlady. A brilliant and fitting swansong for a screen legend.

7 True Grit - 1969 - Henry Hathaway and John Wayne are reunited for this western classic that saw Wayne take his one and only Oscar. It was massive at the box office and is a delight from start to finish. Fill your hand you son-of-a-bitch. 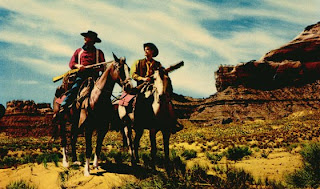 8 Hondo - 1953 -based on a Louis L'amour novel and originally filmed in 3D which perhaps explains why it is not shown as much as the Duke's other westerns. It's a great movie though and one which has been given a packed DVD release as part of the John Wayne collection.

9 El Dorado is basically a remake of Rio Bravo but with Robert Mitchum in the Dean Martin role. There is much debate over which is actually the better film but has Rio Bravo came first I would have to plump for that movie. This though is a stunning movie with Mitchum dominating every scene he appears in.

10 She Wore a Yellow Ribbon 1949 is the middle film in John Ford's cavalry trilogy. Wayne, under heavy make up, plays an ageing character who is serving out his last days on the American frontier. It took an impressive $2.7 million on its first release and has become an evergreen classic. Simply wonderful.
Posted by Gary Dobbs/Jack Martin at 09:56

I don't know that I can make a valid top 10, but I can certainly rank my personal 5:

The first three are all what I consider to be 10/10 movies... and Rio Bravo remains of my two favorite westerns ever made (the other being Unforgiven).