I'm on a film set all day but expect fresh posts on the Archive this evening - It's a week to go to Wild West Monday folks so we gotta get you in the mood.

In the meantime (shameless self promotion warning) I leave you with another Arkansas Smith advert: 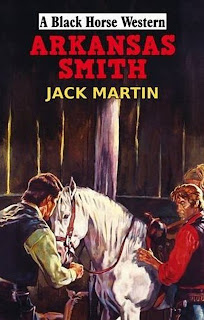 PRE-ORDER the book now from Amazon UK - no monies will be deducted from your account until the book is ready to ship.


Product Description
Arkansas Smith: the name was legend. Once he had been a Texas Ranger, but now he was something else entirely. Some said he was an outlaw, a killer of men and a fast draw. Others claimed he was a kind of special lawman, dispensing frontier justice across the West and bringing law to the lawless. Arkansas Smith arrives in Red Rock looking for those who shot and left his friend for dead. He vows to leave no stone unturned in his quest to bring the gunmen to justice and, soon, those who go against him must face the legendary fast draw that helped tame the West. THE FOLLOW UP TO THE BESTSELLING TARNISHED STAR - ARKANSAS SMITH BY JACK MARTIN.
Posted by Gary Dobbs/Jack Martin at 17:20