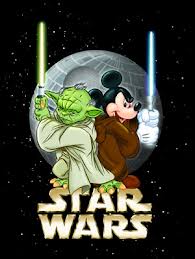 Disney have now confirmed that the first of the new Star Wars movies will see big screens in 2015 and that Mark Hamill, Harrison Ford and Carrie Fisher will all get small roles playing their original characters. The hot bet with fans is that the story will be set a number of years after Return of the Jedi and that Luke, Han and Leia are all now aged characters. I'm inclined to trust Disney on this and it is at least certain that they can't make a bigger mess than Lucus did himself with the second trilogy of Star Wars films. I remember being horrified when Disney took over Marvel but look what happened with the Avengers movie. And isn't it something we all want to see - the original cast reprising the original characters though there will be one exception, at least according to director/comedian Kevin Smith who claims to be playing Jabba.

“I can see both sides of it. Because in a way, there was a beginning, a middle, and an end and we all lived happily ever after and that’s the way it should be — and it’s great that people have fond memories, if they do have fond memories.But on the other hand, there’s this ravenous desire on the part of the true believers to have more and more and more material.” Mark Hamill


"Star Wars 7" will be released in 2015, "with more feature films expected to continue the Star Wars saga and grow the franchise well into the future," Disney Spokesman

Posted by Gary Dobbs/Jack Martin at 03:02