Many years ago I wrote a text based computer game, using a utility called PAW which stood for Professional Adventure Writer. Basically it was an easy programming system that allowed anyone to write a computer game. Then the program would convert your creation into machine code and you'd end up with a working game.

Well I wrote a James Bond parody called Operation Thunderbowel - this was 1988 long before Austin Powers. The plot was that Blobum planned to poison the entire United Nations with a powerful laxative. The game player, was Shamus Bond and had to solve puzzles in order to progress to another level.

Anyway I self published the game under the Sacred Scroll Software title and sent out review copies. I thought I was going to be Bill Gates before Bill Gates.

CRASH MAGAZINE - which was this cool ZX Spectrum mag gave the game a good review and I sold I think, 100 odd Copies. These were on cassette tape and ran on the Spec 48k and up.

The review can be seen - BOTTOM LEFT (click on image to enlarge to readable size.)

Anyway I've not got a 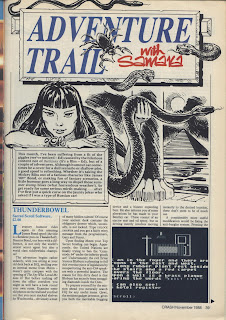 copy of this game and yet all these years later I found that it is available for free download from worldofspectrum.com. And what's more with a free emulator from the same site it runs on a PC.

Isn't that incredible, I wrote the thing in 1988 - over twenty years ago!

Man, I love the internet.

i'm considering trying it out. i'll get back to you, if/when i do.

Lol. Pretty cool, though. I've never written a game. I did a few simple Basic programs to sort data in grad school but nothing else.

Thanks, Archavist, it's nice to be missed! As a Hale writer myself, that's great news about Black Horse. Hale have also recently reduced their crime fiction from £18 to £13, which puts them more in line with the bigger publishing houses...good news all round.

Rafe - I will check out your books. Which would you recomend for a newbie to your work? And any new book news let me know and I'll post in in my regular news section. I cover crime/thrillers as well as westerns.