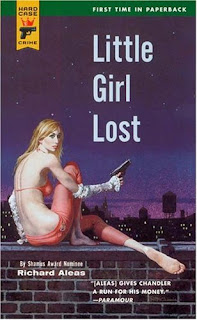 It’s three of the Am when I bring the car into the kerb and kill the lights – it seems as if the illumination is sucked back into the vehicle like some traction beam from a Star Trek movie. It's hammering down with rain, each tiny speck hits the ground like a sledge hammer and the puddles that would before much longer qualify as lakes, shone an eerie orange as they reflected the street lamps. I got out of the car, pulled my pork-pie down over my eyes and the collar of my trench coat over the back of my neck and walked to the house. I didn’t lock the car. I’d be praying for someone to steal the heap for the last five years.

Once inside I threw my coat and hat on the sofa and poured myself a strong one – the liquor hit hard, like a guy who has just caught you giving his wife one through the tradesman’s entrance. I teetered on my feet and decided I’d had enough. It had been a lousy day and my cot was as appealing as a three ways with Angelina Jolie and Marge Simpson.

I climbed up the stairs and fell onto the cot. I reached for the lamp and decided I needed some reading to release my tensions and so I grabbed a paperback from the TBR pile.

Little Girl Lost by Richard Aleas. Course those in the know have got the knowledge that this Aleas is really a patsy. The brain behind this is Charles Ardai; I know the muttonhead - he’s been pushing lurid jacketed paperbacks out of the Big Apple. Hey it could be worse – he could be working for an internet company.

At first I had a problem with this book. John Blake, the detective is so young and not only that but he looks ten years younger than he is. He even gets carded when he tries to get into a bar. Hardly the stuff of Chandler. But as I read more I realised how clever it was the make the detective hero such a fresh face. In many ways he’s the anti-hardboiled dick and yet at the same time he’s every bit as compelling as the work of punks like Robert Parker, Chandler and Spillane. This guy aint no Maltese Chick – he’s a fully fledged falcon.

The story goes this dame gets herself shot. She was a looker and had been working as a stripper in the Sin Factory. Ten years ago she had been this sweet kid – she’d also been John Blake’s girlfriend. And now Blake’s a private dick and is determined to find out what happened to his little girl lost.

As Blake probes deeper he finds himself getting involved with some dangerous low life scum and soon gets beaten to a pulp when he starts sniffing around. But you can’t keep a good man down and soon Blake is back on his feet – determined to get to the bottom of this or die trying.

Nuff said – Little Girl Lost is a powerhouse of a novel with the velocity of a snub nosed bullet. Excellent hardboiled writing from a publishing house that are certain to gain legendary status in the pulp fiction field.

I agree with you that, initially, Blake's age threw me. But, then, I'm a younger guy with contacts (when not wearing the glasses) and I grew to associate with him like few other heroes out there. And the decisions he makes forced me to question myself and what I would do in certain situations. Quite a good book and it only gets better with Songs of Innocence.

Judging from the size of the cover girl's feet, Robert McGinnis must have done it.

I've heard a lot about this "new to look old" series; I'll have to give them a try.

C.k - If you like the old pulps then you owe it to yourself to try these books. I own about twenty and have read half of them and not found one I dislike yet. I buy every hard case I find regardless of author - not only are the covers awesome but you know the pages will hold a thrilling story.

C.k - If you like the old pulps then you owe it to yourself to try these books. I own about twenty and have read half of them and not found one I dislike yet. I buy every hard case I find regardless of author - not only are the covers awesome but you know the pages will hold a thrilling story.

Having seen half of Sin City on BBC3 last night, i couldn't help but hear this post in Marv's voice