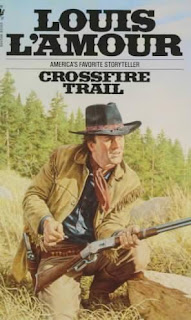 Rafe Caredec is a restless man - a gambler, a soldier of fortune - a man who drifts through life with little purpose. However he is given a reason when he promises a dying Charles Rodney that he will ensure his ranch goes to his daughter, Ann.

However when Rafe gets to the town of Painted Rock he finds that two of the most ruthless and dangerous men in the territory have set their eyes on both the late Rodney's ranch and daughter.

Lamour's skill is in the fact that there's always something going on behind the main action packed traditional western - this book has an underlying theme of redemption running parallel to the narrative. Redemption for Rafe, a way to come to terms with his past and build a future built on doing the right thing with true love as the ultimate prize.

Lamour is still a huge seller more than two decades after the author's death and of course the reason for this is that he's just so damn entertaining.

Good point about how L'Amour always had something going on behind the scenes. He did the redemption think a number of times but I never got tired of it.

Charles - Lamour was without doubt a fine writer

Yesterday I was pleased to pick up a fine copy of L'Amour's FLINT and look forward to reading it soon.