Today our guest blogger is the Brooklyn based film critic Cullen Gallagher with his take on the classic Anthony Mann/James Stewart classic The Naked Spur.

I am a huge fan of the Mann/Stewart cycle of westerns so I was delighted to get this review. You can check Cullens own blog HERE 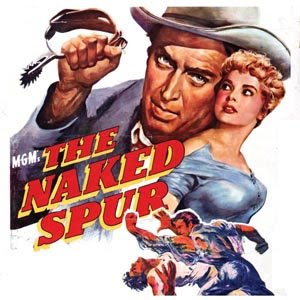 And so The Archive travels across the pond to hand over control to Cullen Gallagher.

There’s a deceptive beauty to Western landscapes. It’s true, the open skies represent the possibility of freedom, and the vast areas of land carry the promises of growth and renewal. But beneath the beautiful surface is its dangerous terrain, demanding and unforgiving. In the barest of elements, there is little that can stay hidden for long, either by nature – or by man. The naked truth – whether raw and brutal, or hopeful and poetic – will eventually emerge. And this transformation is at the core of Anthony Mann’s magnificent Western The Naked Spur (1953).

James Stewart plays a bounty hunter chasing down a price on Robert Ryan’s head. Along the trail, Stewart enlists the help of failed gold prospector Millard Mitchell (who would sadly pass away shortly after completing the film) and dishonorably discharged soldier Ralph Meeker. When they catch up with Ryan, they discover he isn’t alone – with him is a young Janet Leigh, whose family has all died and who has no one in the world except for Ryan. With their captive atop a mule, the quintet starts the long journey out of the wilderness to collect the reward. Ryan’s only chance is to plant seeds of distrust amongst the group, and watch as their bickering turns to anger and their hasty reactions threaten to destroy one another.

Each of the actors delivers one of the finest performances of their careers as they wrestle with their deep-rooted anxieties and psychological distress. They are all haunted by the past and desperate for a better future – which leaves them with the difficult task of dealing with the uncertain present. As Ryan says, “Choosing a way to die ­– what’s the difference. Choosing a way to live – that’s the hard part.” And throughout the movie, the characters take many different paths, switching loyalties so often that they ultimately end up betraying only thems 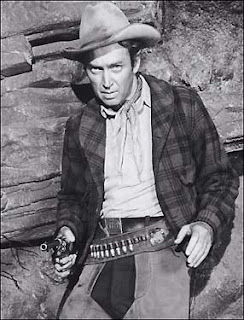 Known for playing “everyman” roles, here James Stewart gets to play a very different type of character for him. As Howard Kemp, he explores a much darker character, one who has suffered betrayal from a former lover and who has turned this resentment into something monstrous. He trusts no one, cares only for money, and has lost all sense of humanity – or so he tries to convince himself. As the group becomes increasingly paranoid and distrustful, Stewart’s emotions become as stark and jagged as the Rocky Mountain terrain they travel through. Shivering with anxiety and misplaced hate (meant for himself but taken out on others), we watch as he goes through a total transformation and comes face-to-face with the darkest secrets of his soul.

Shot on location in the Colorado Rockies, The Naked Spur is terrific from first tense frame to its last, in which the surviving characters, though wounded, finally let go of the past and work towards that hopeful future they wanted all along. The stunningly beautiful Technicolor photography is by William C. Mellor, who also photographed Bad Day at Block Rock and Giant, among many other fine films. If you’re looking for a way to get in the mood for Wild West Monday the Third, look no further than this film, and then check out the many other excellent Westerns directed by Anthony Mann, including The Furies, The Far Country, and Winchester 73.

The Naked Spur is the perfect antidote to any lingering mental typecasting of Stewart as a benign, folksy fellow. The amorality that prevails for most of the film brings us almost to the doorstep of the spaghetti western, and its need to draw the Stewart character back from a moral abyss shows the difference between the spaghettis and what came before.

I've not seen this one. I've always known, though, that my movie education is seriously lacking.

I'm generally OK with that, though

Thanks for turning me on to the Pulp Serenade blog. Brilliant review, and also brilliant interview of you. Terrific stuff. All I can say is get over here. We need people like you to market the Western - even in its native land.

The formatting issues on some of these blogs - I wonder if it's because the posts are sent to you from Microsoft Word documents?

Laurie - that might be but it's all perfect on my pc and browser - I'm using firefox and Vista but you could be correct - it could be a word issue. I'll have to find out how to alter this.

I think the answer on the html code issue is to save the documents in Word as html documents to remove any formatting and then cut and paste them.

that could work, Ian. Word embeds their documents with so many hidden codes, that's why I brought it up.

Sounds simple enough - I'll try that Ian. So I save as and select html - yes?

Jimmy Stewart had such an amazing run in the fifties and sixties and westerns like THE NAKED SPUR and WINCHESTER '73 were superb contributions to the genre.

Yes, that's the command line on my version of Word.