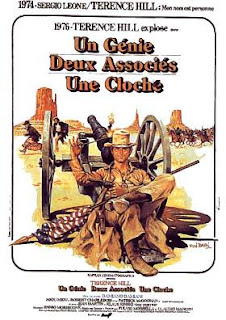 Western fans will need no introduction to today's guest blogger. Steve runs the must read blog Western Fiction review which can be found HERE. Every post - interview or review is always western based on Steve's entertaining blog.

Aka Nobody is the Greatest.

This film was the second to last major spaghetti western – the last being Keoma – and was also the last Sergio Leone was involved with, although his name isn’t mentioned in the credits. You only have to watch the opening scene to know who directed this part of the film. Another farewell is that this was also the last western in which Klaus Kinski appeared: although he’s only in a couple of the films funniest sequences, Kinski gives a magnificent performance as Doc Foster.

Directed by Damiano Damiani (with guidance from Leone), the film was shot mainly in Monument Valley, which provides some stunning backdrops for this fast moving film which is about a con game to get back and return some stolen money to it’s rightful recipients. There are many comic moments, in which the films main star, Terence Hill, shines as Joe Thanks.

The villain of the film, Major Cabot, is a crooked cavalry officer who is planning an Indian massacre in order to line his own pockets, played by Patrick McGoohan, perhaps better known for his roles in The Prisoner and Danger Man.

If the film tries to put across any kind of message, it’s that of anti-racism, and it came across as a natural part of the story.

As well as the con game, there’s a second plotline of Joe Thanks and Steam Engine Bill (played by Robert Charlebois) as they vie for the love of Bill’s girlfriend Lucy (Miou-Miou).

As always Ennio Morricone’s soundtrack is superb, highlighting the appearance of certain characters, the key moments of the plot, and adding to the fun of the comical scenes – many of the latter causing me to laugh out loud.

At times the film seems a little disjointed but this could be due to the fact that the original final cut was stolen and the producers refused to pay the ransom demanded for it’s return and redid the film from what they had left, which also means the quality isn’t all it could be.

Perhaps not the best spaghetti western around, but it’s definitely entertaining and I’d probably watch it again.

An honest review as always by Steve. Shame about the formatting issues - made my eyes boggle! :-)

Thanks for that, Steve.

Klaus Kinski, Patrick McGoohan and Terence Hill... why have I never heard of this film before?

I remember enjoying a number of Terence Hill spagesterns but don't recall catching this one. You wonder who would want to steal the film for ransom? I mean, there must be better films that could have been stolen. Perhaps one of the actors wasn't satisfied with the product or wage-cheque...

Jo - what browser are you using?

Terence Hill movies I love whether serious or light. From Cat Stevens to Trinity to Nobody - he entertains.

This is a great little movie, sadly never played in the U.S., as far as I know. I found a Region 2 DVD a few years ago. I keep hoping that somebody like Scorcese or Tarantino will rescue it from obscurity. Quite a bit like MY NAME IS NOBODY (same writer, Gastaldi, and it was called NOBODY IS THE GREATEST in Germany). I don't know how they landed McGoohan for the role of the scheming cavalry officer, but he nearly steals the show.