THE BEST OF VICTOR - Book review 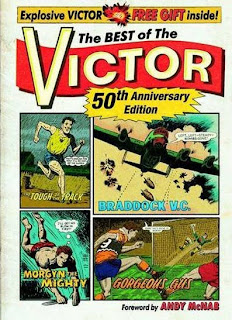 Back in the day issue one of Victor sold a staggering 497,786 copies and by the mid-Sixties its weekly circulation was over half a million. The comic started in 1961 and according to online sources (including the Wiki) it ran until 1992 but I wasn't aware of this and I stopped seeing the comic in the shops during the mid 70's - the only D C Thomson weekly comics I can remember when I was a kid were Warlord, The Beano, Dandy and a handful of girl's titles - still it seemed Victor did run until 1992. Strange that - as a kid I was always in the newsagents buying comics and yet I can not for the life of me remember the Victor being there. Maybe by the mid-Seventies the circulation had shrunk and the title didn't make my rural backwater.

However this superb hardback book concentrates on the early days of the comic and makes for some great nostalgia. It's also lovingly put together with the interior pages looking aged. There's also a free gift attached inside, of the kind the comic used to give away. A cardboard device that makes a snapping sound when you swipe it through the air. We used to think things like that were cool back in the day. And they're still cool - and so for the big kid inside us all you get a free Victor Bang with the book.

All of the most popular scripts from the early days of the comic are included - Morgyn the Mighty (the Welsh Tarzan.), Tough of the Track, Gorgeous Gus, Tales of the Pony Express, I Flew with Braddock. In fact the book is bursting at the seams with square jawed heroes and thrilling escapades carried out by behind enemy lines or on the sports field. And of course everyone gets home for a nice cup of tea and some crumpet. - insert your own retro smut here!

The index to the book is pictured left - notice the packed contents and the aged look and feel of the paper. It certainly is a handsome looking book that is well made with an obvious regard for quality.

I've written before about how amusing and interesting the letters pages in old comics and magazines can be and thankfully, The Victor Book contains several reproductions of letters pages from a very different world than the one we live in today, a world when kids worried about the correct temperature for the water in their hot water bottle.

Reader Geoffrey Telfer points out that although water takes more power to heat than many other liquids, it does stay hot longer than any other liquid. So what you lost in your breakfast you gain in your hot water bottle.

Another reader (Paul Smith) then adds that the Amazon river pours 3,500,000 cubic feet of water into the Atlantic Ocean every second.

Wow!!! - oh hang on, wasn't that another British comic?


The Victor Book - it's out there now and will make a great Xmas pressie for any middle aged comic book fan.
Posted by Gary Dobbs/Jack Martin at 12:23

Email ThisBlogThis!Share to TwitterShare to FacebookShare to Pinterest
Labels: the best of victor

Interestingly, three of The Victor mainstays, Braddock, the Tough of the Track and Morgyn the Mighty, had all featured prominently in D. C. Thomson's earlier story paper The Rover. I was an avid reader of these text versions as a child in the 1950s. British comics were around, but if it came to a choice between, say, an issue of Super Detective Library (picture-strip versions of Edgar Wallace, the Saint, etc) and the all-text Sexton Blake Library, the latter usually won my eight pennies. It lasted longer, I could imagine the action visually for myself, and pocket money wasn't too plentiful!