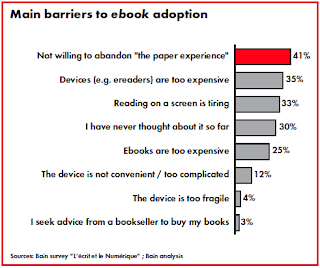 There is no doubt: the digital book will find its place under the sun; its prospects look much better than those of the online press. In the first place, there isn’t an ingrained, now decade-old, habit of reading news for free on the internet. Second, the book (in its physical form) is the centuries-old incarnation of the “cognitive container”, with its unparalleled convenience and with a value attached to it. And third, it can’t be unbundled.
For the online press, on the contrary, more than 90% of online newspapers are available for free. The “cognitive container” is totally non-practical in terms of size, readability; the interface sucks: most broadsheets’ stories run on two pages but many readers don’t go beyond the jump. Lastly, the daily news is begging for unbundling (look at the Sunday edition of your favorite newspaper, with its ten plus sections).
What does the book gain by switching to the electronic format?
Three things:
- new formats with rich media appealing to reluctant books readers (the current Generations X and Y, mainly)
- enhanced capabilities such as search, ability to create a personal table of contents, or to extract and index snippets
- a complete overhaul in the production system, which will breed new market opportunities as editorial works, once finished, will enjoy instant worldwide availability.
Of course, obstacles remain. A recent survey conducted by Bain and Co listed eight obstacles in the way of widespread ebook adoption (PDF here).

Interestingly enough, said its authors Patrick Behar and Laurent Colombani, the nostalgia of the “paper experience” is disconnected from the generation factor: all age groups continue to enjoy the book as a physical object. This guarantees some level of coexistence between the two medias. But the authors also admit the two next barriers – the price of the device and reading comfort –  will fade quickly as Moore’s Law still rules, both for mass produced devices and for screen quality (see for instance Qualcomm’s Mirasol display combining the advantages of electronic ink and the color depth of LCD screen — see also this story in The New York Times). On the devices’ price, Bain & Co sees the following evolution and point to the thresholds required to convert purchase intents:

Manufacturers: uncertain. Users expect around a hundred dollars or euros for an e-reader and will soon expect three times this amount for a full color, full-feature tablet. To put things in perspective, a teardown analysis made by iSuppli shows the cost of components for an Amazon Kindle is $176 as the iPad reaches $264 and $214 for the Samsung Galaxy Tab. This gives an idea how thin margins are likely to be in the future. In other words, manufacturers who won’t be able to sell the blades (i.e. contents) along with the razor will have a hard time making any money.

Publishers: warning. Let’s put it this way: I wouldn’t bet the farm on book publishing houses at this moment. For the vast majority of them, they don’t seem to grasp the full potential of the ebook. Some are stuck in their defense of the paper-based book by preventing Google Books from scanning their inventory – of which 80% is not available to the public for a variety of practical reasons, mostly the fixed cost of a print run compared to the low sales of specialized or out-of-fashion titles. In the meantime, many publishers say — publicly — their digital future lies essentially in the enriched book loaded with multimedia features and contents. Except for one thing: in private, they invest very little in such features. In addition, the notion of R&D seems completely alien to their culture.
Authors: invent & enjoy. By authors, I’m encompassing the typical writer who sweats in front of his/her computer, but also yet-to-emerge new breeds of ebook designers, producers, editors and marketers. The ability to tell an original story, to edit a journalistic investigation will remain essential. But the notion of producing a complete package will become acquire a new importance as users will care for more multimedia features. At the same time, marketing will require new skills such as organizing an efficient presence on social medias.
New entrants: a boulevard ahead Except if publishers are able to set up agile digital teams within their ranks, these new talents and crafts will blossom outside the framework of traditional publishing houses. These incumbents are likely to suffer from the syndrome that still plagues the newspaper industry: no appetite for technology, no belief that mastering cutting edge technologies are key success factors, therefore no propensity to invest in engineering. This will leave wide boulevards completely open for new competitors eager to combine the professionalism associated with traditional publishing with the most advanced technology. Get ready for the Huffington Post of book publishing (hopefully less disingenuous).
Telcos: joining the fray
Telecommunications companies, especially cellular carriers, are likely to play a key role in the development of the ebook. First of all, they will subsidize tablets and readers; in some instances, they will offer free downloads for books or multimedia contents as part of deals with retailers. In some countries they will aggregate contents on their own portals and manage the distribution process. In Japan, carriers do exactly that for a rather inexpensive 9% of the retail price.
Bookstores: a small number of survivors
The city of New York had 330 bookstores in the Thirties, recalls the publisher Andre Schiffrin in its just released Words & Money; now, the number is down to 30. In France, Germany and Spain, laws preventing excessive discounts by big retailers saved bookstores. In the long run though, they will have to adapt fast. This might be easier than originally thought: apparently, Google will built its Google Editions around bookstores by allowing them to open e-stores through its program. In doing so, bookstores – well, some of them – could offer books-on-demand printing services, eliminating costly physical inventories. This could result in millions of out-of-print books made available on paper again. New specialized printers such as the Expresso Book Machine are now able to spit a paperback in 4 minutes and for about $8 (video here). Soon, the best managed bookstores, even modest ones, will be able to rent such machine for the price of a large photocopier.
Posted by Gary Dobbs/Jack Martin at 06:11