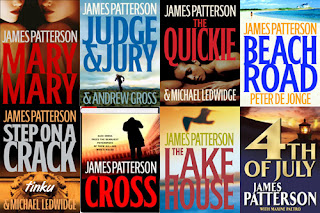 He has outsold Stephen King, Dan Brown and J K Rowling and yet James Patterson is seen as the Simon Cowell of literature - he's successful but ultimately without substance, his books leave the reader feeling empty and unsatisfied. He has turned his name into a brand much like Coca Cola and writes (or gets others to) in all genres.

"My success revolves around the fact that I am fairly analytical, logical, have a pretty good IQ but I’ve got street smarts too. You know, a lot of people who have nice IQ’s are just dumb as a brick when it comes to thinking about how other people think and what they might like and how to act in public and things like that. I think I have, you know, gifts involved of those areas. I mean, if I am writing a story that kids are supposed to not want to put down, if I don’t feel it, then I don’t think kids will feel it. If I don’t think that the pages are moving in the story and the characters aren’t involving, then I’m going to assume that the people reading it won’t.” James Patterson recently told an interviewer in his defence. 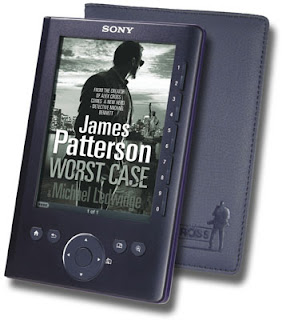 "I probably wouldn't try to write a literary novel. I think I can write an acceptably good novel, but I am not particularly interested in talking to that audience. I think a lot of the things that are praised are just kind of show-off prose, which is just not my thing. I can appreciate it, you know. I'm a big reader and I read all kinds of things, but it is not something I want to do." James Patterson

I agree with Patterson on the last point, most literary fiction comes across as pretentious and plot less - give me a good escapist read over literary fiction any day and I guess he does give struggling authors an opportunity to reach a mass market but Patterson's name is always in bigger print than the actual author. And I somehow doubt that these writers for hire are making the untold millions Patterson rakes in from their labours.

"My fundamental goal has always been simply to tell good stories. In that regard, my attitude I expect is much the same as it was 30 years ago." James Patterson

That's all very well but seeing as Patterson doesn't write most of the books published under his name the argument falls flat. Now I've not read his early books so I can't comment on those but I had three of his books preloaded on my Sony eReader (pictured) and I deleted them after giving up on Double Cross - to my mind it was terrible writing with no characterisation and too many cliffhangers.  I mean some of his chapters are one page in length - what the f**k is that about?

Patterson has recently branched out into video games, again carrying the Patterson brand, and again this cheapens his books. It's okay for a video game to be based on a writers novel but when the game is marketed as by James Patterson it all comes out as a purely commercial exercise with all the integrity of the X-Factor. I mean let's be honest the X-Factor is flashy and fun but it's never going to produce an act of any lasting worth and it must piss off all those real artists who are learning their craft around the music clubs and festivals

Patterson's advice to new writers - "Write a good book; that is what most authors can do. Just write a terrific book that has some kind of a hook or uniqueness that people are going to respond to. Write it in a way that people will not be able to stop reading it, and that they will compulsively read. That's really the best advice I can give most people."


Maybe he should practice what he preaches. 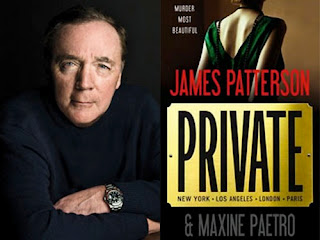 Patterson wrote his first book when he was 26 and won an Edgar so he must have the talent and I'm reliably told that some of his early works, Along Came a Spider and Kiss the Girls are excellent but I don't think I'll ever read them because of his dominance in all markets and the Patterson brand leaves a nasty taste in my mouth. I love reading but I want to read works that actually mean something to the author and are not driven by the desire to rake in even more millions and millions. Another problem I have with all this PATTERSON BRAND is that readers follow favourite writers because they know what they are going to get, they trust the author to give a good story but with Patterson books you're getting a mish-mash of writers and obviously some are better than others.

Still Patterson is a genius - his bank balance is proof of that.
Posted by Gary Dobbs/Jack Martin at 13:24

The Patterson case is a sad commentary on the state of a book world where success is based as much on hype and brand-name than content. New writers are driven to desperate ploys to make a mark in this rat-race environment.

Today, I received an email from a debut novelist. Here it is with names and titles deleted "to protect the (I hope) innocent":

This is a mass email I'm sending out to a whole bunch of you. Forgive the lack of "personal touch" ... it would take too long.

As most of you know, earlier this year my first novel was published: [TITLE DELETED]. It's received very good reviews and I've been contracted to write two more. One's already done, and will be published in the UK and US in March, the other is currently being written.

Despite what most people think, novelists don't get rich. In fact, they hardly make any money at all. Those who do, do so because they are good self-publicists and they do as much as possible to raise awareness of their book.

So that's what I must do, and I would be HUGELY appreciative if you could take 3 or 4 minutes to help me by going to this website - http://awards2011.sfx.co.uk/ - and voting for me.

Basically, you will have to vote on a few pages; things like BEST SCI-FI FILM 2010 and BEST ACTOR 2010. Each page has a drop down menu in which you can just click something at random if you're not interested in what you vote for.

HOWEVER, when you come to BEST BOOK, if you don't see "[Title Deleted] by [Author Deleted]" in the drop down, please write it in the field and vote. Then finish the survey ... and THANK YOU for helping me to achieve my greatest ambition!

Me am novelist, yay!

I responded as follows:

"Thank you for your email, and congratulations on publication of a first novel. Frankly, as a professional fiction writer for more than 40 years, I am appalled by, though not unaware of, modern methods of becoming a success in the digital age. Social networking and self-publicity are all very well, but I don't feel I can stoop to participation in an attempt to rig an 'awards' system. Indeed, if the objective can be achieved by soliciting votes from all and sundry, it only undermines the worth of receiving the award! Please forgive me if that sounds pompous.

"As you seem to suggest yourself, there will be people voting in all categories who'll 'just click something at random if [they]'re not interested in what [they] vote for'. Won't the SFX followers know this? How long will the awards continue to be coveted? Perhaps readers (i.e. intelligent people?) can be fooled for a while, but I'd prefer not to have to accept that.

"I don't ordinarily read sci-fi and fantasy these days, but my hope is many sci-fi people will become aware of your book by more conventional means, will read it, enjoy it, watch for the next (and the next), and tell their friends. I like to think it's still possible to build a lasting career in genre fiction, though I believe this has never been credible in less than ten years and without a hardworking publisher who knows his business and can predict its trends and potential.

"You and your publisher have done well so far to gather a clutch of enthusiastic reviews."

I feel that both Patterson and my new-entrant correspondent make a mockery of the profession.