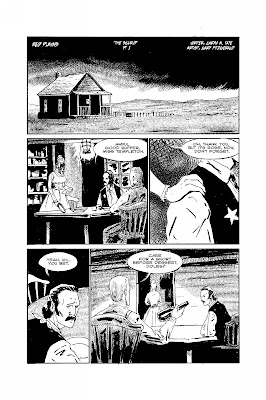 Andrew Hall is a blogger for My Dog Ate My Blog and a writer on Online Computer Science Degree for Guide to Online Schools.
Red Plains is a webcomic and western by Caryn Tate, currently being distributed via Top Shelf 2.0. While her story takes place in the American west, her influences take the work far beyond the western medium as a genre exercise. Instead, she uses it as a springboard to tackle noir and institutional corruption, as well as the long-term effects of violence within American culture through an ensemble cast.
The first arc of Red Plains, "Range War," opens on a shooting that escalates into conflict between the Stevens family - itself conflicted between father Doug and destructive son Jackson - and the Templetons, land squatters who have moved west to find a new life for themselves. From there, Tate begins to develop her ensemble by introducing new characters in every installment, bringing in people to fill the roles throughout the town of Red Plains and around it. 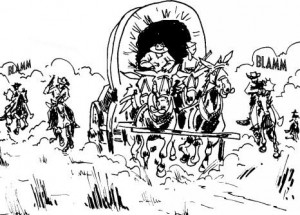 Noel Tuazon pencils and inks the comic. Characters and buildings are presented loosely with heavy inking to create sharp contrasts between black and white space in each individual frame, often rendering one half of an image considerably darker than the other. The compositions are stark and emphasize point of view largely by making closeups darker than whatever's in the distance or in motion; many images carry only their most essential information - people and the objects directly relevant to the action - so as to render the narrative less central to the setting and more applicable to contemporary America.
If there's a clear parallel between Red Plains and another work, it's The Wire, David Simon's television series about institutional corruption and the drug trade in Baltimore. While this may seem somewhat of a stretch, Tate has clearly borrowed motifs from Simon's repertoire. She starts small and works her way into bigger and bigger situations and settings, allowing for new characters to appear when necessary and expanding from a simple conflict into a much greater view of a world in general. She also allows for violence to erupt suddenly and shockingly, one of the things that often made The Wire so much more than a simple police drama. She even goes so far in places as to borrow character names - the second installment introduced a crooked lawyer named Levy, for example - and motifs like the colorful epithet that became corrupt senator Clay Davis' trademark.

Top Shelf publishes new installments regularly, making it easy to keep up with Red Plains as it develops.
at November 19, 2010

nice info you got here mate… keep the nice blogging