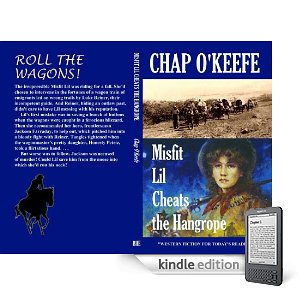 Move over Calamity Jane - Misfit Lil is in town.

This hot chick of the west would have Wyatt Earp tongue tied, send Billy the Kid weak at the knees and transform John Wesley Hardin into a gibbering wreck - I urge anyone who considers themselves to be western fans to buy the eBook and show that the genre which has always been too tough to die, has a place in this new eWestern world.

Misfit Lil is something of a paradox - thoroughly modern in outlook yet she doesn't seem out of place in the Wild West setting, which is great testament to the skill of author, Chap O'Keefe. I could say this is a feminist western but I won't since the character transcends gender and will appeal equally to either sex. In fact female readers who have never read a western may even find this book an accessible introduction to this genre and its limitless possibilities.

For newcomers to the character I have cribbed from an article, written by series creator Chap O'Keefe, that originally appeared in issue 21 of Black Horse Extra, which should give some insight into the appeal of this great western character. If you want the full article, minus my mutterings, and why wouldn't you?, then click on the link above.

"BEFORE the likes of Edge and the violent protagonists of spaghetti movies, the western heroes of popular fiction tended to be plain, simple, uncomplicated, very conventional characters. And male, of course.

For Black Horse Westerns, always thoroughly traditional, Misfit Lil broke the pattern. Not only female, she was clever, unconventional, and extremely impulsive. But BHW and Linford Western Library readers liked her. Possibly they liked her all the more because she behaved in ways that might outrage maiden aunts and the politically correct."

But as Chap O'Keefe states -
"As the chronicler of Lil's exploits, I like her, too. But she is a handful and has given me a swag of problems."

"Lil delights in speaking her mind, in pranks, in mischief, in wearing practical, outdoor male attire. These aspects are at the heart of the back story which gave her the "Misfit" moniker, a story sketched in every book but most particularly in the early books, like Misfit Lil Rides In and Misfit Lil Fights Back."


Western writer, David Whitehead said of Misfit Lil and the new book in particular -  "I'm so glad to see that this book is starting to get the recognition it truly deserves. Take it from someone who has collected and read westerns for more than forty years, Misfit Lil Cheats the Hangrope stands head and shoulders above the current crop of competitors! It has a fabulous story with – to this reader, at least – a completely unforeseen dénouement, vivid, lively characters and regular bursts of action which – and here's the important bit – STEM NATURALLY FROM THE PLOT and aren't just shoehorned in to beef things up a bit. I have, of course, read Chap O'Keefe for a long while now, but genuinely feel that this is his best to date!"

Later this summer the Archive will again celebrate the western genre with another Wild West eMonday and it is books like this that will be leading the charge. Indeed Chap O'Keefe has always been heavily involved in the various Archive promotions and if Archive readers scroll down to the bottom of this blog's sidebar (it's just above the copyright notice) they will find a full free Chap O'Keefe novel to read here on the Archive. You can print out this novel, previously published by Black Horse Westerns, or even cut and paste it and convert it into a PDF and then put it on your eReader - Now that can't be bad and incentive enough to rush on up the Amazon and buy the new Misfit Lil in eBook at the incredibly low price.
Posted by Gary Dobbs/Jack Martin at 03:23

Today I downloaded this to my Kindle, Gary, and look forward to reading a further adventure of an original creation.