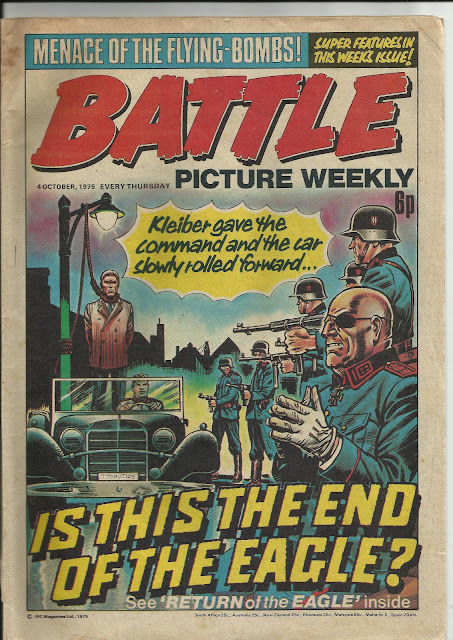 In 1975 a new comic was launched by IPC that would forever change the face of British comics - created by Pat Mills and John Wagner, Battle Picture Weekly was launched in order to compete with rival publisher D C Thomson's successful Warlord which was racking up impressive weekly sales. Warlord, although tame by today's standards, was also far more gritty than was the norm for comic books, and IPC knew that they had to compete by bringing out an equally gritty comic.

Both Mills and Wagner were freelancers and both had been contracted by IPC to work in their girl's comic department. However Wagner soon quit comics after editing two failed titles, Sandie and Princess Tina - Sandie was cancelled after selling only 199,000 copies which may seem impressive figures all these years later but at the time most comics sold a quarter of a million copies a week.

When Mills was put in charge of developing a new comic to rival Warlord, he requested John Wagner be brought back into the fold and so in late 1974 the two men started work on what would become Battle Picture Weekly. 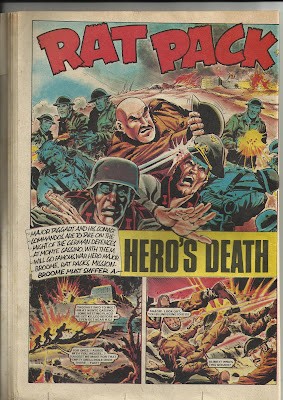 "The old school felt our stories were too violent," John Wagner said in an article for Judge Dredd Megenzine in 2003. "We certainly were in comparison to them but you can't be too violent. Part of it was a reaction to way comics had been up until then - too safe, sanitised. Characters never died, nothing ever changed, nothing progressed. It was so unreal and with Battle we wanted to kick some butt."

And Battle certainly was a breath of fresh air - where in the past stories had always been about upper class officer types, the comic broke with the norm and most of its lead characters were working class soldiers. It also produced in time two of the best ever British comic strips in Charley's War and Darkie's Mob.

Battle was a huge success, though not in quite the way it had been expected. Day of the Eagle was intended to be the lead strip but being so heavily influenced by Warlord's Peter Flint, it seemed out of  place in the comic. Where the rest of the strips were at least based in a gritty reality, Eagle was all James Bond style shenanigans. By far the most popular strips were D Day Dawson, Rat Pack and The Bootneck Boy. 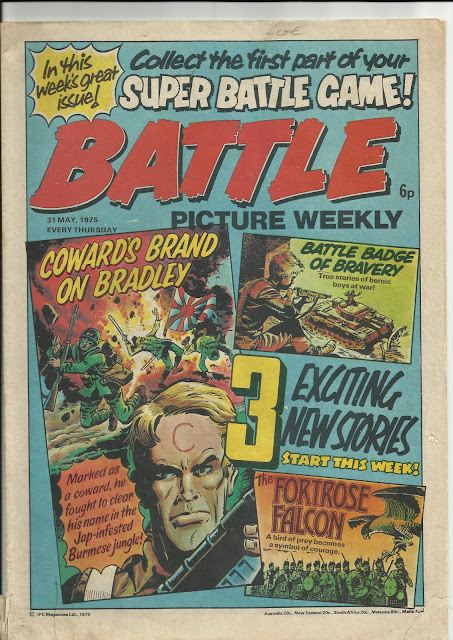 Mills left Battle to concentrate on a new title which became the controversial Action and Wagner became script editor on the girl's comic line. Dave Hunt was now in charge of Battle.

Issue 37 introduced three new serials - Merril's Marauders featured an American troop fighting in Asia,  Y fOR Yellow Squadron told of a misfit band of RAF pilots as they were licked into a tight fighting unit and Destroyer which was a Navy strip. None of these would last the course though. And it wasn't until issue 45 that a character came along who was as popular as Battle's big three - Dawson, Bootneck Boy and Rat Pack.

This character was Major Easy - a James Coburn lookalike who kept ice cool in battle and drove a battered Bentley around the battlefield. And so popular was the new character that he soon booted D Day Dawson into second place in the readers polls. In British comics there was also a box for readers to list their top three stories and then send these into the editor. All of IPC's comics did this which allowed for an almost instant guide to what the readers liked. 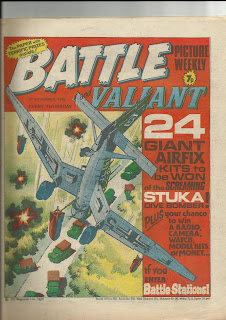 In October of 1976 IPC found its title Valiant losing popularity and so it was merged into Battle and the comic now became known as, Battle Picture Weekly and Valiant. The comic continued until 1977 when Action was merged into the title and the word Valiant dropped.

During the time if a title failed then it was common practise for the dying title to be merged into a more successful title, with only the most popular strips being carried over. And so Battle now became Battle Action and the title truly entered a golden period.

In my opinion Battle Action was the best British comic ever produced - I think it topped 2000AD on quality and that the only reason 2000AD outlasted it is that 2000AD concentrates on the sci-fi genre which is more in favour with the core audience. However in terms of storytelling Battle Action could beat 2000AD hands down. Take Charley's War for instance which 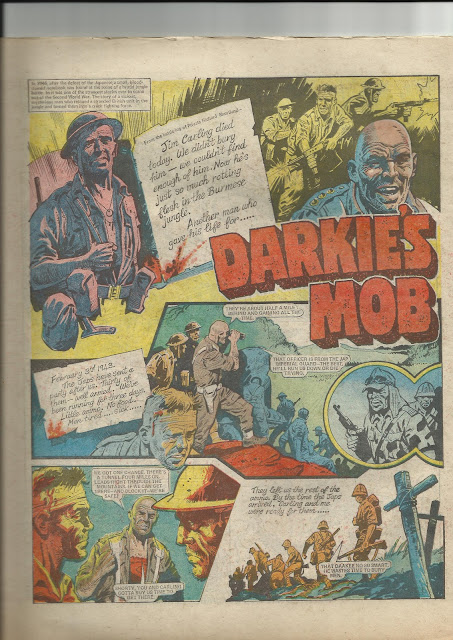 Take Charley's War for instance which must hold valid claims for the title of best ever comic strip story. Set during World War 1 and with a dirt poor, not very smart, working class boy as its central character, the story was an anti war parable as epic as any great novel. And there were also other strips which represented the best storytelling ever produced for the comic book format - Johnny Red, The Sarge and Hellman of Hammer Force to name but three.

The name Battle Action would remain until 1982 when the title reverted to plain old, Battle.

However in 1983 the title became Battle Action Force and started to include stories using the Action Force toy range as characters. It was here that the slid began and the gritty Battle of old was all but gone.

The title did survive until 1987 when it became Battle Storm Force and then in 1988 Battle itself was merged into the revamped Eagle becoming Eagle with Battle.

It was the end of an era.

comic's history - click on any for a large readable version. 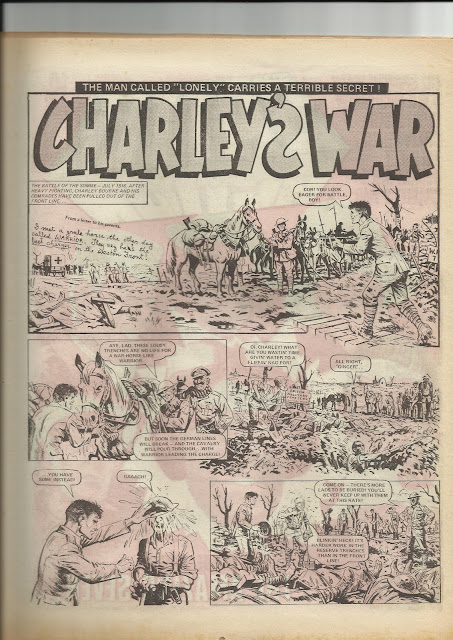 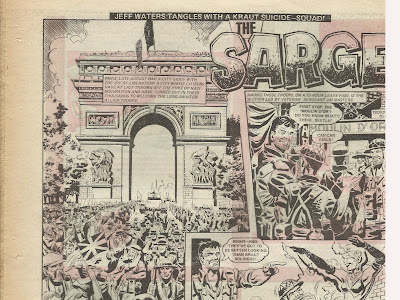 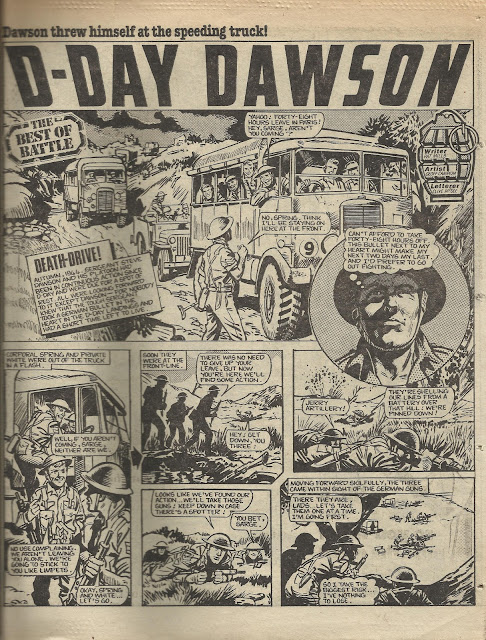 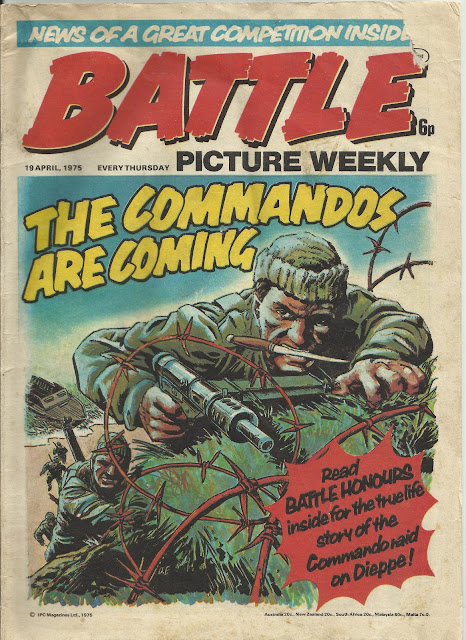 Posted by Gary Dobbs/Jack Martin at 07:26

This was my favourite comic by far.

i enjoyed watching the recent fan movie of judge minty on youtube.is anyone working to bring battle comics to life?