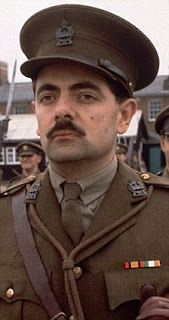 According to a survey held by the Ask Jeeves search engine,  25% of British people think Sherlock Holmes was a real character - that's not surprising but the survey goes onto state that many people also believe Blackadder was also real.

Others believe there was a real Captain Mainwaring leading the nation's home defence during the war and that Dad's Army was based on him. Others think Clark Kent and Indiana Jones were genuine people too, according to Ask Jeeves.

The confusion between fact and fiction goes both ways, it has emerged, with other respondents to the survey believing Che Guevara, Florence Nightingale and outlaw Jesse James were fictional, not real.

A similar number think Miss Marple – soon to be played on film by Jennifer Garner - was real when she is actually another fictional detective, created by Agatha Christie.

Most incredibly, one in five respondents thought Edmund Blackadder was a genuine historical figure, even though the comic creation appeared in a BBC series set in four very different eras.

More than a third think pirate Long John Silver was real, not realising he is a character in the novel Treasure Island, others believe Hercule Poirot is real and a small number even think Batman and Doctor Who are based on truth.

Posted by Gary Dobbs/Jack Martin at 01:17

Email ThisBlogThis!Share to TwitterShare to FacebookShare to Pinterest
Labels: fact and fiction

And I bet the same people think Santa is a ficticious character too!! Ha!!

Does this mean Butch Cassidy did not team up with Pecos Bill in the Wild Bunch?