Donald Westlake all new novel gets the Hard Case treatment

The Archive hands over to Charles Ardai, editor of the Hard Case Crime series who tells us about an exciting discovery - 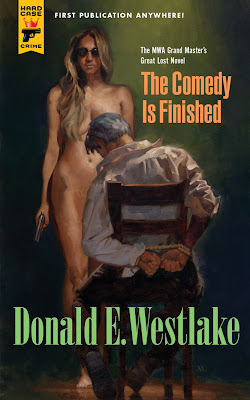 A bit of exciting Hard Case Crime news this morning: we're going to be bringing out a never-before-published novel by the great Donald E. Westlake.

Don began work on it in the late 1970s, but ultimately decided not to publish the book after Martin Scorsese released his movie "The King of Comedy" since Don was apparently concerned that the premise of his novel and Scorsese's film were too similar.  He shouldn't have worried -- aside from both having to do with kidnapping a television comedian, the two are completely different.  But he did, and the result is that there's a Westlake novel that's been sitting unpublished in manuscript form for the past 30+ years.

The title is THE COMEDY IS FINISHED and it's going to be our lead title for 2012 -- only the second book ever to be published in hardcover by Hard Case Crime.  (Our first hardcover is our lead title this year, GETTING OFF by Lawrence Block, which comes out on September 20.)

There now follows the press release from Titan Books

Hard Case Crime to Publish THE COMEDY IS FINISHED
New York, NY; London, UK (April 18, 2011) – Hard Case Crime today announced the discovery of an unpublished novel by acclaimed mystery writer Donald E. Westlake. THE COMEDY IS FINISHED, which Hard Case Crime will publish as its lead title in 2012, tells the story of an aging, politically conservative comedian kidnapped by a domestic terrorist group that threatens to kill him unless the government frees some of their imprisoned comrades.  Westlake, who died on New Year’s Eve 2009, was a three-time winner of the Edgar Allan Poe Award, received an Academy Award nomination for the screenplay of The Grifters, and was named a Grand Master by the Mystery Writers of America, the organization’s highest honor. THE COMEDY IS FINISHED will be only the second novel ever to be published in hardcover by Hard Case Crime, the award-winning line of mystery novels published by Titan Books.
One of Westlake’s long-time publishers, Hard Case Crime has also published authors such as Stephen King, Mickey Spillane, Pete Hamill, Madison Smartt Bell, Ed McBain, Lawrence Block, and Max Allan Collins.  In 2010, Hard Case Crime brought out Westlake’s novel MEMORY, then believed to be the author’s final unpublished manuscript.  Subsequently Max Allan Collins told Hard Case Crime editor Charles Ardai about the existence of one more, a manuscript Collins had read in the early 1980s.
Westlake worked on THE COMEDY IS FINISHED over the course of several years starting in the late 1970s, but decided not to publish the novel when, after completing it, he saw Martin Scorcese’s 1983 film The King of Comedy, whose premise also involves the kidnapping of a television comedian.
“Aside from that one shared element, the two stories are completely different,” said Charles Ardai.  “But Don apparently was concerned enough about the possibility that some readers might see a similarity that he set the book aside and never published it.”
THE COMEDY IS FINISHED takes its title from the closing line of the tragic opera Pagliacci, and though the novel is about a comedian it is not itself a comedy. Rather, it is a high-tension suspense story focusing on the FBI’s efforts to capture the terrorists, the victim’s struggle to stay alive, and the kidnappers’ conflicts as their plans begin to go awry.
“We are very excited to have the privilege to bring this lost work to light,” Ardai said.  “Millions of fans around the world will get something they never expected to see again: a new novel by Donald Westlake.”
THE COMEDY IS FINISHED will feature a new cover painting in the classic pulp style by award-winning painter Gregory Manchess and will be released simultaneously in hardcover and e-book editions.
About Hard Case Crime
Called “the best new American publisher to appear in the last decade” by Neal Pollack in The Stranger, Hard Case Crime has been nominated for or won numerous awards since its inception including the Edgar, the Shamus, the Anthony, the Barry, and the Spinetingler Award.  The series’ bestselling title of all time, The Colorado Kid by Stephen King, was the basis for the current SyFy television series Haven, while Max Allan Collins’ Hard Case Crime novel The Last Quarry inspired the feature film The Last Lullaby, starring Tom Sizemore. Universal Pictures has features in development based on two Hard Case Crime titles, Little Girl Lost and Songs of Innocence by Richard Aleas.
Founded in 2004 by Edgar and Shamus Award-winning crime novelist Charles Ardai, Hard Case Crime is published through a collaboration between Ardai’s media company, Winterfall LLC, and Titan Publishing Group.
About Titan Publishing Group
Titan Publishing Group is an independently owned publishing company, established in 1981. The company is based at offices in London, but operates worldwide, with sales and distribution in the US & Canada being handled by Random House. Titan Publishing Group has three divisions: Titan Books, Titan Magazines/Comics and Titan Merchandise. In addition to fiction, including novelizations of films such as Terminator Salvation, original novels based on TV shows such as Primeval and Supernatural and the popular computer game Runescape, and the celebrated Further Adventures of Sherlock Holmes series of novels launched in 2009, Titan Books also publishes an extensive line of media- and pop culture-related non-fiction, graphic novels, art and music books.
Posted by Gary Dobbs/Jack Martin at 11:24