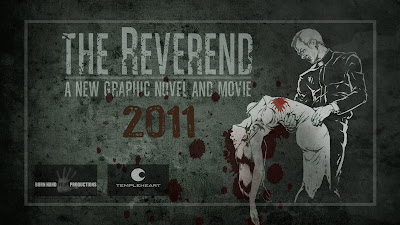 Regular readers will know that Neil Jones is the man who will be responsible for directing LawMaster, which is the movie adaptation of my novel Tarnished Star. You know, I actually dig the title LawMaster more and more each time I use it. Neil's currently shooting a new movie, The Reverend and for some time now I've been dropping hints and basically nagging Neil for a part in the movie.

Well Neil was obliging with the offer of a part which was... well not exactly what I had in mind. I was told I'd be playing the part of a character, described in the script as The Gimp and that I would be...well, put it this way mistreated somewhat.

This Sunday I did the shoot and had a great time. Burnhand Films always assemble a great crew and the night shoot I was involved in, 11pm to 7am, went smoothly and without any lasting ill effects. It's the first horror film I've ever worked on, at least as an actor rather than an extra, and from what I could see it's going to be a cracker - it certainly offers a new slant on the vampire mythos. There will also be a graphic novel version of the film released and expect news of that here on the Archive soon.

Fresh from seminary school a new Reverend embarks on his first parish. A small, low maintenance Chapel based in the quiet idyllic setting of a quiet country village. While on the surface the village seems to be a peaceful parish, with perfect residents, soon it becomes apparent that something more sinister lurks beneath the façade of a local businessman. On a wet, cold night a mysterious girl visits The Reverend at the chapel. Cold and upset she is welcomed in warmly, soon it becomes apparent that her visit is not for sanctuary but to deliver a message, a message in the form of a deep, bloody bite... Awoken with an unknown, uncontrollable thirst a confused Reverend can find no evidence of the girl from the night before, with nothing but the thirst and memory of the bite, The Reverend embarks on his mandate, to clean up the village and the neighbouring estate, by preaching or feasting. With striking visuals from one of Britain's rising directors...


The Reverend will be with us soon, so keep checking here for news. And in the meantime I leave you with the trailer for another interesting looking film, from Burnhand Films, Andrew C Tanner's Masterpiece.

Posted by Gary Dobbs/Jack Martin at 10:58

Email ThisBlogThis!Share to TwitterShare to FacebookShare to Pinterest
Labels: the reverend

And here I thought you'd just had a tough day signing your books to the adoring legions. :)