THE COMPLETE LITERARY 007 - Win, Lose or Die by John Gardner 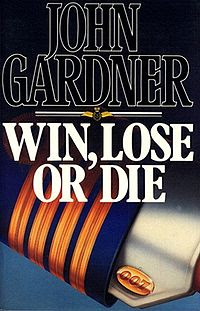 This was John Gardner's eighth Bond novel and continues the roll the author had been on since No Deals Mr Bond. Once again we have another better than average Gardner Bond novel which whilst not strictly faithful to Fleming's Bond it does manage to engage the reader.


One annoying aspect of the book is that Gardner (probably on the copyright holders orders) has Bond uttering corny one liners every time he does something. Now whilst this worked well in the Roger Moore Bond movies, it doesn't really work in prose and only serves to dilute the well maintained suspense.

Gardner's Bond novels have seen a steady progression of changing Fleming's basic elements - previously he had wiped out the OO section, retired the Walther PPK and now the author changes Bond's rank from Commander to Captain. I'm not sure what the author was trying to achieve here, but if it was to freshen things up and give the formula a few twists, then it seems a sure fire way to risk alienating long term fans of the literary series.

There are enough set piece to please the 007 fan and describing action was one of Gardner's strengths.

This isn't Gardner's best Bond novel but it's far from his worse.
Posted by Gary Dobbs/Jack Martin at 12:08