THE DIGITAL TAKEOVER:Will digital books catch fire this holiday? According to an online survey, 1 in 5 shoppers said they planned to buy an electronic book reader such as a Sony Reader or Amazon Kindle this year. When asked what they would like to get as a gift this year, about 1 in 10 cited a digital book reader. Portable music players, once the hot holiday ticket, got just 3.4% of the vote, while game consoles came in at 6%. Likely buyers tend to be men, under 35 years old, living in the Northeast where more people use public transportation, and with an average annual household income of more than $100,000, according to the survey of 771 respondents.

Of those who said they planned to spring for an electronic book reader, 62% said they would buy Amazon's Kindle 2 or Kindle DX, while 32% favored the Sony Reader. Although Amazon and Sony dominate the business today, more devices are scheduled to hit the U.S. market within the next year, including the $399 IREX expected later this winter and Plastic Logic due out in 2010.

The wonderfully scatty Sarah Palin: Only announced a few months ago but it has now been confirmed that Sarah Palin's autobiography will be in stores by Christmas.

EVEN THE US ARE FOLLOWING THE UK WITH THIS NONSENSE: For a country that venerates its First Amendment guarantee of freedom of speech, the United States tries to ban books with alarming frequency. 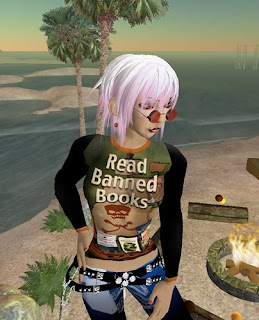 Stick a pin in each place where there's been a challenge to a school or library book, and you'll have a map of the United States that looks like a hedgehog in need of a haircut.

This year already, challenges have been reported from Montana to Indiana to Texas, in high schools and libraries, and from classics like Toni Morrison's The Bluest Eye, to newer books like Brent Hartinger's The Geography Club and Chris Crutcher's Chinese Handcuffs.

This February in West Bend, Wisconsin, a local couple filed a petition calling for the Library Advisory Board to remove or label several Young Adult titles, including Francesca Lia Block's Baby Be Bop and Stephen Chobsky's The Perks of Being a Wallflower, because they felt that all the books in the young-adult section that dealt with homosexuality were "gay-affirming." The couple also requested that the library build a collection of books by "ex-gays" in order to achieve an ideological balance.

GOOGLE BOOK SETTLEMENT DEAD IN THE WATER: The Settlement, however, has received an exceptional amount of objections from a variety of sources, including countries, states, nonprofit organizations, and prominent authors and law professors. Indeed, objections to the settlement are too numerous to discuss fully here, but include concerns regarding orphan works, potential antitrust violation, and privacy concerns. This has resulted in the parties renegotiating many aspects of the agreement. Just yesterday, Judge Chin of the Southern District of New York, granted a motion to delay an October 7 hearing on the settlement given the fact that the parties are renegotiating the agreement. In light of all this, it remains to be seen to what extent the settlement can survive in any form…

I read this morning that Sarah Palin's book is going to be called "Going Rogue: An American Life," and it's going to be 400 pages. No joke.

I read that, too. Apparently she spent tons of time in San Diego and New York with the "help" of various editors writing that stuff. Can anyone say "ghostwritten"?

Laurie - three hundred pages are scans of clothing receipts though