Like Patricia Cornwell's book reviewed yesterday, Stephen Knight's The Final Solution offers what seems a plausible solution to the crimes of Jack the Ripper. And he presents his 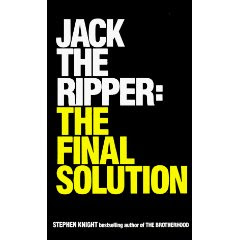 case in an authoritative manner and leaves the reader once again thinking we have our man - or men in this case. However unlike Cornwell's theory the Royal Conspiracy theory is easily debunked and can be disproven without any doubt at all.

The premise of this book is that The Duke of Clarence ( a known homosexual) had a secret marriage to a prostitute and fathered a child with her. The woman was snatched by shadowy agents of the Royal family and lobotomised by the Queen's physician William Gull. There were five women who knew about the marriage and child and these were the canonical Ripper victims. It was this theory that formed the basis for the Johnny Depp movie, From Hell and indeed Stephen Knight's documentary, The Final Solution is hidden away on the DVD of the movie as a easter egg.

The theory comes from a story told to BBC researchers by Jeseph Gorman, a man who claimed to be Walter Sickert's (the man Cornwell claims was the ripper) illegitimate son. The theory is still the most popular with movie makers, writers and the public. However the fact is that it can be cast aside as a fanciful nonsense and not only that but Joseph Gorman later admitted that he had made it all up and his claim to be Sickert's son has never been established. Indeed if one believe Cornwell's claims about Sickert then he was incapable of fathering a child.

If there had been a Royal Conspiracy involved would they have dispatched of the women in such a high profile way? And these women were dispatched in a ferocious and brutal fashion with the killer overpowering them easily - we are asked to believe that William Gull, Queen Victoria's physician, a man in his seventies, was largely responsible. Another point against the theory is that William Gull had actually suffered a stroke a few years before the crimes.

Also if there was a Royal Conspiracy one would expect to find a White Fiat Uno mentioned in witness statements. 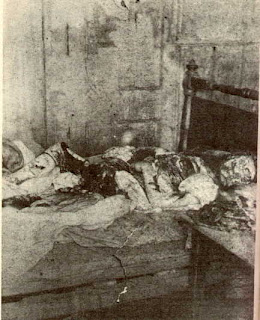 To my mind the reason that the conspiracy angle is so popular is because it contains all the elements of a Dan Brown thriller - the royals, the freemasons. There are even parallels with the Royal conspiracy regarding Princess Diana - The Ripper conspiracy claims the Royals act because Prince Eddy has fathered a Catholic child and with Diana the conspiracy claims she was pregnant with a Muslim child.

However Stephen Knight offers a plausible sounding amount of evidence and it is only when you look further into the case that you realise much of his evidence is based on hearsay and supposition with the most troubling thing being that his chief source admitted to making the whole story up. And it can't be proven that the man was actually the world famous artist, Walter Sickert's son. Add to that the fact that the conspiracy involved the five canonical victims having known each other when there is no proof of that. Indeed it is highly unlikely that they did so. However what is becoming clear through evidence now turning up is that the final victim in the canonical five may have actually modelled for Sickert. She was also the only victim killed at home and was brutalised far worse than any of the others, almost flayed to the bone the autopsy report claims. This seems to add credence to Patricia Cornwell's claims about Sickert - did the artist, unable to have that which he desired because of his deformed penis, see Mary Kelly (crime scene photo above) , the only one of the five victims who could have been described as attractive, as a mockery of his condition? Did Mary Kelly discover that he had done the other killings and have to be silenced?


Despite the lack of hard facts, the Conspiracy theory remains one of the most popular. It continues to appear in popular fiction and media, eclipsing all other theories. The reasoning for this is quite simple - conspiracy theory are always popular because most people (rightly so) do not trust the government. However it does make an interesting story and when read as fiction it is absolutely riveting - this fact has not been missed by most as this theory is often the basis for movies, television shows, comic books, and novels.
at September 26, 2009

Gone out on a limb and re-opened the case on my blog.