when he said The Beatles are bigger than Jesus 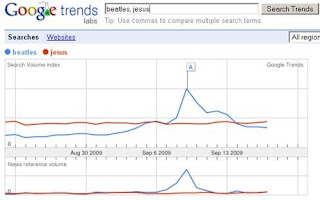 ians by claiming his band were bigger than Jesus, he has been proved right by an analysis of search terms on the Google search engine. In the last four weeks more computer users have typed in the search word "Beatles" on the Google website than "Jesus". The popularity of The Beatles has increased substantially during September thanks to the re-release of all of their albums digitally-remastered. Though it must be remembered Jesus had no album out this month.
at September 27, 2009

Jesus has an amazing album that's supposedly ready to go, but the release date keeps on getting pushed back. (LOL)

And lots of folks who think more of Jesus than the Beatles don't have internet.

The difference is, a lot of Beatles discs have been re-released recently, so Google is a bit naive taking a measure right now. They forget, Jesus is here and always has been and always will be; The Beatles have been and gone and are just coming back for a short while. All to do with stats - remember the American election when the pollsters telephoned people to get a handle on who would win? They forgot that not everyone had a phone at the time... Duh!