Book Reviews: The Hawks of Delamere by Edward Marston 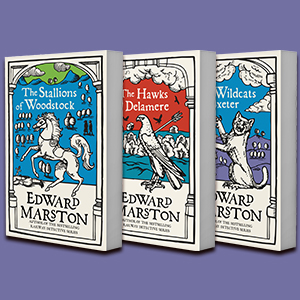 I've been reading a lot of historical fiction over recent months, but this is the first time that I've dipped into Edward Marston's works - the book is set in the historical mystery subgenre and is set in the 11th Century.

This is actually the seventh book in the series set around the compilation of the Domesday Book, and featuring Ralph Delchard and Grevase Bret who have been tasked by William the Conqueror to look into serious irregularities that arise while engaging in the great survey.

Those who know their history know that the Doomsday Book, or to use it's Middle English spelling, The Domesday Book was the result of agents being tasked to survey every shire in England and a goodly part of Wales in order to secure taxes and discover the strength of power following the Norman conquest.

This being a crime novel rather than a straight historical book means that the reader gets a lot of the colour of the period, whilst the main thrust of the story is the mystery that unfolds with the historical landscape very much setting the parameters within which the fiction works. 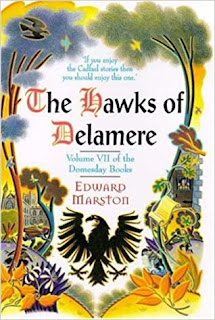 The book opens with boastful Earl of Chester ( a vile tub of lard of a character) out with an hunting party when his beloved Hawk is shot out of the sky in Delamere Forest. Two poachers, a father and son are found nearby and with no evidence they are accused of killing the bird and cruelly lynched. Not long afterwards, Ralph Delchard and Gervase Bret arrive in Cheshire in order to carry out work related to Domesday. It is not long before another man is killed by an arrow and it becomes evident that the earl may have carried out his cruel justice in the woods on the wrong men.

The medieval slueths' are soon up to all manner of intrigue as they try and stop and killer and avert an all out war.

I thoroughly enjoyed this book, and followed the story easily without having read any of the other books in the series that preceded it, so I guess that each of the novels can be picked up and read in any order.

I'll certainly be reading more of this series and anyone who enjoys mystery with history will no doubt find a lot to like here.

Available both digitally and in print