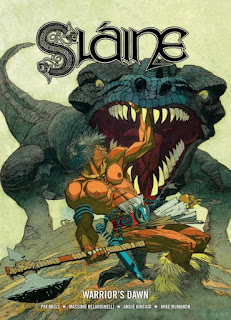 By the time Slaine appeared in the pages of the comic, 2000AD (issue 330) I had long ceased to be a regular reader and although I was familiar with the character, having read the odd episode from time to time, I wasn't really familiar with the strip. That was until I picked up this graphic novel that collects together the first era of Slaine's adventures.

The world of Slaine is based heavily on Celtic legends, particularly those from Ireland but there's a mish-mash of historical myth and legend used to build the world. For instance, the Blood Eagle torture features which comes from Skaldic poetry and is most associated with the Viking legends. It is also interesting that most historians these days are of the mind that the blood eagle was a literary conceit and never actually occurred. It matters not since everything works so well in the world of Slaine, even the time travel which, I believe, features more heavily in later adventures.

The first episode of Slaine, titled The Time Monster sees Slaine pitted in a prize fight against a Tyrannosaurus  Rex and introduces the wonderful character of Ukko - the celtic warrior's sidekick who like most fantasy dwarfs loves gold and is totally lecherous. He's also extremely entertaining and is great comedic device to get Slaine from adventure to adventure. At one point he leads Slaine to buy a prison, hoping to make a great profit but of course things don't work out as planned. They never do and Ukko's money making schemes are often foiled by the barbarian - at one point they come across a cart carrying mead and rather than selling the drink, Slaine decided they should drink it - 'Robbing carts is thirsty work.' 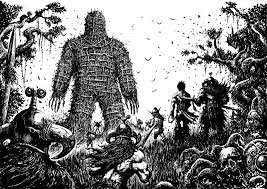 Slaine has the ability to warp spasm - think of the Viking legends of the berserker and you pretty much get the picture - though Slaine's spasms actually physically change him so he becomes a literal representation of the marauding monster he becomes. It sounds weird and it is, but it works supremely well.

There are three artists used in these early stories Angie Kincaid (here credited as Angie Mills), Messimo Belardinelli and Mike McMahon and each have wildly differing styles - McMahon's sketchy art takes some getting used to since it can sometimes be very detailed and at other times deceptively simple, whilst Belardinelli's work is incredibly busy - no one draws grotesque characters like he does. The first artist Angie Kincaid was actually married to Pat Mills when she drew this story and her style is very European - it's such a pity she only did the opening episode since it was she who set the bluepring for Slaine that all others would have to follow.

I really enjoyed this book - laughing as I read in several places as Mills is a master of black comedy. It really is great stuff and if you're wondering why Slaine became such an iconic character then all the evidence is here.

Hugely recommended for anyone interested in great comic book entertainment

Currently available in print and digital.