The Men with the forgotten Pens: Walter Tyrer


My previous post on Walter Tyrer and the Sexton Blake novel resulted in me getting an email from keith Chapman - it's always nice to hear from Keith, the man behind Chap O'Keefe, author of so many great westerns.

Now as well as penning all those great westerns, Keith can claim a lifetime working in the publishing industry, and can always be relied upon  to supply interesting anecdotes.

Keith tells me that Walter Tyrer was not in fact a pen name, but rather a prolific English writer who wrote under not only his own name but many others.

Here's what Keith had to say:

"Walter Tyrer" (1900-1978)  was the man's real name, although I do know he wrote under others, such as "J. T. Lang". He used this one when working for Micron/G. M. Smith, probably to thwart any possible complications should word leak back to Fleetway who were his main employers.  While I was editing at Micron, he contributed scripts for their 64-page romance and western comic-book "libraries" (clones of various Fleetway titles and forerunners to DCT's Commando) and short stories for Edgar Wallace Mystery Magazine. He also offered to do rewrites of his Sexton Blake novels for the latter, but I rejected that as I wanted the mag to be "all new" except for the Edgar Wallace reprints." 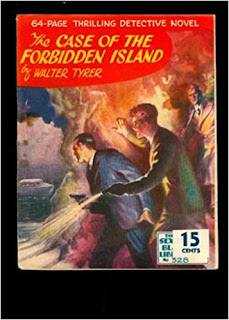 Keith went onto to direct to me an article at the Sexton Blake blog HERE.

It turns out that Tyrer passed away in 1978, and had been born in Liverpool in 1900 - during the second world war he served as an ARP warden, and during the previous war had served with the Royal Navy. A prolific writer, he wrote more than 30 novels for the Sexton Blake Library alone.