Duffle Coat Manor doesn't have that much of a ring to it and yet that was the locally used name for the manor house that Hammer films turned into Bray Studios.

The house had been used immediately following the war to store duffle coats -  but the roof leaked and the coats took in so much water, swelled to blob like proportions, that the weight caused the entire inside of the building to collapse, and when Anthony Hinds visited the building it was little more than a shell.  The film company  took over residence of the manor house in 1951 - Initially the building was rented for studio space but a year later it was purchased and became world famous as the home of Hammer Films. The colourful nickname of Duffle Coat Manor has now been largely forgotten, a footnote in the history of this remarkable studio. 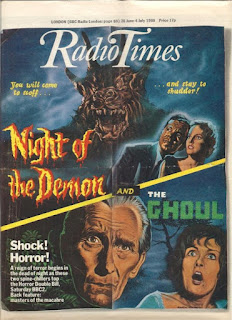 When I was growing up - I was ten years old in 1975 and during this period the movies were regularly shown on late night television, usually as a double bill - my parents took their parental responsibility seriously and I was never allowed to stay up to watch the movies. Maybe they considered the movies too scary, too graphic for my young mind. Though I think the real reason was that they didn't want me staying up after they had retired and munching  all the chocolate biscuits. The reason matters not but it resulted in the movies taking on the status of forbidden fruit. And we all know that forbidden fruit taste sweeter than any other kind.BBC2 was the channel and  usually on a Saturday night they would start a horror movie double bill - the channel regularly ran a double bill horror season from 1975 until 1981. The show would start somewhere around 11pm and go on until 1am - then we would get the test card as the station closed down for the night - I shit you, not. TV used to close down in those days. The days of 24 hour TV were still some years away. Often it would be a double bill of the old black and white Universal horrors, and I loved those too, but on times they would select films from studios such as Hammer and Amicus. These two British studios produced films where the blood dripped impossible red and the heaving breasts were bared. I reckon I saw my first pair of tits in a Hammer movie and believe me that leaves a lasting impression - thank you Ingrid Pitt.'Critical opinion doesn't really concern us at Hammer. We judge our films at the box office. We're a perfectly commercial company. We turn out films we think are fairy tales.' Michael Carreras, Hammer Films.Hammer movies were my faves - the company had started out during the Thirties, and produced a spooky thriller, The Mystery of the Mary Celeste in 1935 which starred Bela Lugosi - in a sense this was the studio's first brush with Dracula given that Lugosi was Hollywood's best known Count Dracula.During the war Hammer were largely inactive. The company was reformed in 1947 as the production arm of Exclusive Pictures. There's an interesting story there, of how Hammer transformed from a low budget studio, producing cheap comedies and thrillers to a name that became synonymous around the world with horror movies.That's a post for another day, though - for now let's go back to those double features.This LINK will take you to a You Tube video from 1977 of Kenny Rogers talking about the Horror Double Bills. 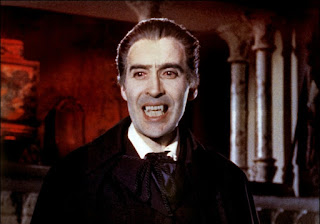 Now I vividly remember sneaking downstairs one Saturday night after everyone else had gone to bed, and switching on the TV. I kept the volume low and didn't dare turn on the lights and this was my first experience of Christopher Lee as Dracula. Checking back in BBC listings I think this must have been the 14th September 1976, I was two months aways from my 12th birthday, and I think the movie was Dracula: Prince of Darkness. This was the first Hammer movie I'd ever seen and I was transfixed to the screen, which often ran blood red. The reason this sticks so clearly in my mind is because that night I had the most vivid nightmares and my father had to run in when I woke up screaming, pointing, yelling - 'He's behind the door.'  True story that, not a word of a lie and I'm sure my father remembers it. After all he went bat shit crazy the following day when he discovered the dent I'd made in the packet of chocolate biscuits.Of course today the films have dated, but there's a certain something to a Hammer film that makes them so watchable. Horror films today are far more graphic, the special effects more realistic but give me a Hammer movie over the adventures of Jason or Freddy any day of the week.
at October 04, 2021