Die Another Day is a tale of two halves, the first half is mostly good, the second is nearly always awful. This is how Pierce Brosnan's Bond goes out, which is a damn shame. Rotten Tomatoes Review

Die Another Day: impossibly bad and utterly unmissable – The Guardian 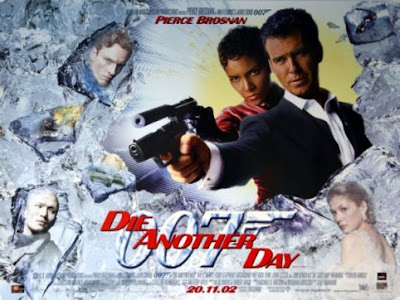 Die Another Day was Pierce Brosnan's final Bond film and today it remains one of the most wildly panned movies in the history of the franchise. Some even claim it is the worse Bond movie of them all.

I'm not sure why, since it is without a doubt better than Quantum of Solace, Spectre and maybe even Moonraker. A lot is made of the stupid invisible car and yes it is silly, but then is it truly any more outlandish than the submarine car in The Spy who Loved Me? 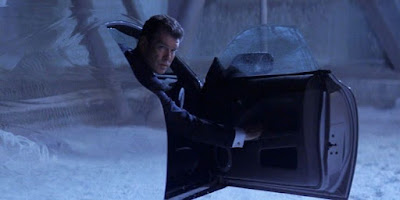 Even my favourite Bond of them all, the late great Roger Moore took a swipe at the invisible car -  “I thought it just went too far – and that’s from me, the first Bond in space!”

So let's put the invisible car aside - yes the moviemakers may have gone too far but I would hate to think that these excesses were responsible for the boring Bond movies that would follow with Daniel Craig's era in the role.

Another weak spot in Die Another Day is the ropey CGI, which just doesn't look real but then it remains preferable to the action scenes in A View to a Kill where the stunt double for Roger Moore can clearly be seen.

I watched Die Another Day again in preparation for this article, and to be honest I really don't think the film is as bad as its reputation suggests, and maybe I'm a strange Bond fan but I would take it over all of Craig's Bonds with the exception of Skyfall. And there is really no logical argument to suggest that it is a worse entry in the canon when Quantum of Solace clearly deserves that dubious accolade.  I would also argue that the Craig films making Blofeld Bond's long lost brother is far more outlandish than anything Die Another Day does. In fact that little twist with Blofeld is a mockery of the franchise itself.

So why all the hate? The first section of the movie is superb, with Bond captured and tortured in Korea. He is held there for fourteen months and looks like one of Charles Manson's followers when he finally emerges. A quick shave and a visit to the tailor sorts this out and Brosnan is immediately the 007 of old again. This may be a bit jarring and perhaps the movie should have explored the aftermath of Bond's imprisonment and torture, but then this is James Bond - he is invincible after all. Maybe they should have remembered that with the travesty of an ending in No Time to Die when the producers sacrificed Bond on the Woke alter.

What follows are perfectly normal Bond action scenes - all of them over the top and many of them breath-taking. Brosnan is again superb in the role. Looking far more like James Bond than Craig ever could. There is also the fact that at the time Die Another Day was the most successful Bond movie of them all, but then that means nothing given that Craig's movies have been even more successful.

I really don't think Die Another Day deserves the hate it gets, and it remains perfectly watchable today. In fact it's aged rather well. Yes, it maybe the weakest of the four Bond movies that Brosnan made but it is far from the weakest entry in the series. It's a solid enough movie - blunt instrument or not the celluloid character of Bond has developed over decades of great movies, and this movie honours that character and that legacy. Somewhere down the line the movie Bond and the literary Bond became very different characters, but at the same time aspects of Fleming's original creation remained the same as they were ported across to the big screen.

I'm a lifelong fan of the Bond franchise - I've read Fleming's canon, some of them several times, and I've also read everything done by other authors who have built on the Bond story.

I've seen every Bond on the big screen since Moonraker - I've been a Bond nut for many years.

In fact, I've seen every Bond movie more than once and I love aspects of each and every cinematic era, which is probably why I don't really like the latest movies in the series. I know that Casino Royale is a very good thriller but it just doesn't seem nor feel like a Bond movie to me, and so to my mind Die Another Day is preferable since it is very much a Bond movie and depicts the character that has developed from all the other Bonds who went before. No matter how well scripted, acted and put together a Bond movie is if you've got the central character of Bond wrong then it's not really a Bond movie in the first place.

The best thing about this movie, the one thing that raises it above the movies that have followed is that Pierce Brosnan is playing James Bond and not some Bourne clone - it is Bond that we pay our money to see, and we know that this comes with a certain amount of baggage - So what, if there is an invisible car! It's only a small part of the movie and although it seemed stupid on first viewing it does improve with subsequent viewings. So what if the CGI is a bit ropey! It was of it's time and perhaps a little too ambitious given what could be actually achieved at the time.

James Bond will return, the movie promised as the final credits rolled and you know, when you really think about it, we're still waiting.