It all leaves a bitter aftertaste....

Is there a subject the Tainted Archive won't touch?

Not really, and today I want to talk about the beers, particularly those marketed as craft ales that have become so popular over recent years, because I'm confused by something. You see, I'm primarily a whisky/whiskey drinker. Indeed I collect whisky's and consume maybe a little more than I should, but I do from time to time enjoy a good pint of beer/ real ale...call it what you may.

Traditionally, my favourite kind of beer is a good bitter - so why then, does the word bitter seem to be vanishing from the vocabulary of beer makers? 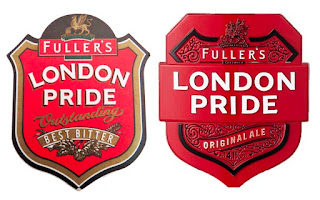 A case in example is Fuller's London Pride (damn good beer) which was once marketed as London's Pride Best Bitter, but has been rebranded as Original Ale. And it's not the only one out there - Marston's  Pedigree Bitter is now Marston's Pedigree Amber Ale, Spitfire Premium Bitter is now Spitfire Amber Ale....the list goes on and on and on. 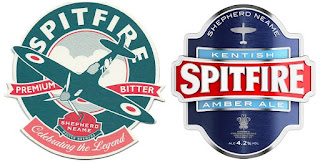 What's it all about?
Why has the word Bitter been wiped from history?
Picture the scene: It's 1979, you walk into a pub and amble to the bar, a ciggie dangling from the corners of your mouth, brylcreem holding your hair in quiffey splendour. You coolly put your money onto the polished bar, grab a handful of peanuts from the tray, and look the landlord in his smiling eyes and, 'Pint of best bitter please.'
As opposed to:
It's 2021, you walk into a pub, but not before covering thirty miles trying to find one that is still open, you stroll slowly to the bar, nodding greetings at the diverse bunch of characters seated around tables and head straight for the freshly sanitised bar. There are no peanuts and the landlord is not so much smiling, as looking kind of worried. You look him in the eyes, produce your debit card and, 'A glass of Amber Ale please, my good man.'
What's it all about? 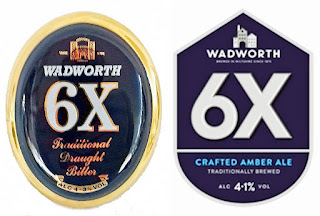 It's all so confusing. As far as I can tell the beer itself hasn't changed but the name bitter seems to have been considered a NO NO. Likely some focus group somewhere are responsible for this, but what I want to know is...what the fuck! Why?
Last night I had a glass of Adams Southwold Bitter - one of the few brews, still using the name bitter. Of course, I'd like to say it tasted all the better for the traditional name, but then that would be silly... Wouldn't it?
Anyway, it was a nice drink - smooth, creamy and not at all bitter, but then bitter beer never really tasted bitter in the first place. 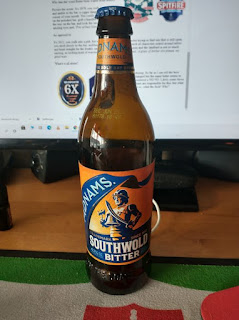 What's in a name, I hear you ask. Does it really matter?
I guess not, but it's a bit strange why beer which has traditionally been called bitter now goes by so many different names - amber ale, golden ale, red ale...anything but bitter.

Historically pale ale and bitter have been the same thing - brewers used the term pale ale for their beer, but the consumer (those brylcreem wearing boozers) called them bitters.

Or as the beer historians put it -  Generally in the 19th century brewers called the drink in the brewery “pale ale”, and that’s the name they put on their bottle labels, but in the pub drinkers called this new drink “bitter”, to differentiate it from the older, sweeter, but still (then) pale mild ales.

I guess that over time the consumer use of the word bitter rubbed off on the brewers who then started marketing their pale ale as bitter -  According to the Wiki - The term "bitter" has been used in England to describe pale ale since the early 19th century. Although brewers used the term "pale ale", before the introduction of pump clips, customers in public houses would ask for "bitter" to differentiate it from mild ale; by the end of the 19th century, brewers had begun to use the term as well.

So it seems that things are changing again and the word bitter is falling out of style, and does it matter. Maybe not in the grand scheme of things, but I still think of beer as bitter, and I certainly don't think it should be a dirty word.

'Pint of your best bitter please, my good man.

Quick fact - the first ever pint I consumed in a public house was drunk in the old Ely Pub in Thomastown. These days the once grand old pub is a convenience store.

The deep brown pint was bought for me by my uncle Jeb (I think I was likely under age) and the drink was.....Welsh Bitter.