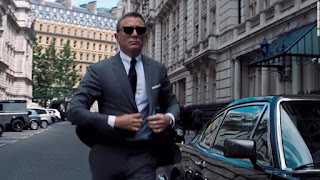 Daniel Craig's latest and last Bond is raking in the cash and receiving mostly positive, even raving feedback - I've not seen the movie yet and initially wasn't going to bother, but given the news of the shock ending I'm going to see it next weekend.

So I thought now would be a good time to remember the fury Craig met when he initially took the role.

When Craig was first announced as the new Bond the naysayers immediately lamented the “blond Bond” and criticized his blue eyes. The London Daily Mirror on Oct. 15, 2005, ran his photo with the headline “The Name’s Bland … James Bland.”

At Craig’s first meeting with the press, he arrived via a speedboat on the Thames; he was wearing a lifejacket, which led to endless media mockery. Reporters were even more appalled that he chewed gum during the press conference.

The hostility shifted into high gear. The Sun newspaper reported that Craig had suffered sunburn that stopped filming of Casino Royale. It also was reported he didn’t know how to drive a manual car. “Craig’s 007 Can’t Get in Gear.”, the headline proclaimed.

“Craig confessed he doesn’t like guns,” said another British newspaper and then went onto report that he lost two teeth in a fight scene with “minor actors”

This prompted Barbara Broccoli to announce: “His teeth are fine, he doesn’t have heat rash, and he’s not afraid of the water.”

Craig is the longest-serving Bond, at 15 years, though in fairness this is due to the fact that these days there is a long delay between movies and of course the Covid crisis held back the latest Bond film several times over.

As a Bond fan myself, I'm still not overly fond of Craig's version of the character but there's no escaping the fact he's been a massive success in the role.

Email ThisBlogThis!Share to TwitterShare to FacebookShare to Pinterest
Labels: 007, DANIEL CRAIG, no time to die