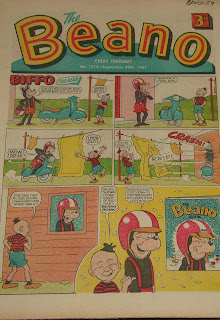 rst published in 1938 and is still running, making it the world's longest running weekly comic.

I came across the issue photographed here in a jumble sale a few years back - it's from 1967, I was two years old at the time, so it's a little before my time but most of the characters in this issue were still in the comic when I started reading it, probably in the early 70's. The only stories here I hadn't heard off was The Q-Bikes and Punch and Jimmy. This particular issue is numbered issue 1315 and is priced at 3D - that's, three old pennies.

You've got to admire the cheek of these guys - the cover story, Biffo the Bear, is basically an advertisement for that year's Beano Annual.

Open the pages and there's a 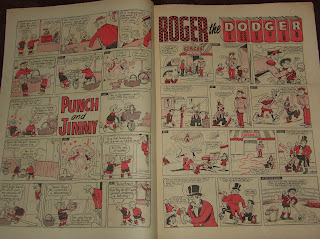 nother familiar character - Roger the Dodger. It's great to read these old strips - Roger seems to be having pretty much the same problems he's always having. Finding himself without any money to visit the travelling circus he has to come up with a dodge to get himself in but, surprise surprise, things go wrong and he ends up having to do some hard graft in order to achieve his ends.

Billy the Cat follows - Billy was a sort of British superhero -

"William Grange, later joined by his cousin Kathleen, alias Billy the Cat and Katie, were acrobatic crime fighters who helped the police to solve crime and catch "crooks" in the town of Burnham. They both wore "cat-suits" in order to conceal their true identities." 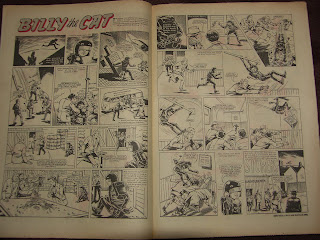 The next two strips, a page each, are Little Plum and Billy Whizz. I loved both these strips as a kid - especially Billy the Whizz and I can clearly remember trying to whizz around the village just like him when I had a tracksuit (one of those dreadful tight ones with the two stripes that we thought we so cool back in the day. Mind you I suppose they were in relation to the flared trousers, chuncky heeled boots and striped tank tops.) for Christmas one year.

Good days indeed - open your stocking and there's an apple and orange, a plastic torch, some bubbles and a striped tracksuit. No computer games in our day - which is just as well since...well, there was no SCART connections on our Black and White televisions for one thing.

"Arguably, the best known British comic of all time. The Beano started life a year before WW2. Issue #1 was dated July 30th 1938. It was called, "The Beano Comic", and had Big Eggo the ostrich on the front cover. It was the companion paper to The Dandy Comic which had started 8 months earlier, and proved extremely successful. "


Note although both The Beano and Dandy are still running, The Dandy is now a fortnightly comic so The Beano has the record for being the longest running weekly comic in the world. 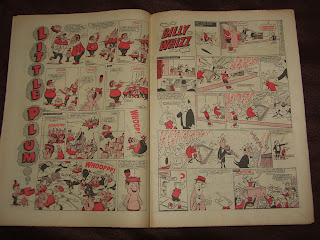 In this particular issue the centre pages are claimed by The Bash Street Kids - and in full colour too. Course back in the day it was common for the only colour in UK comics to be the front and back covers and the centre pages. In fact the centre pages were usually kept for one of the more popular stories - thus the distinction of being in colour. 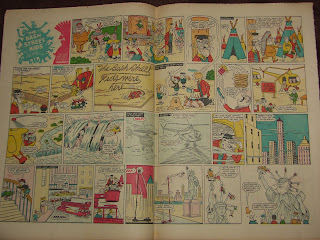 There's a great website HERE which holds tons of information on not only The Beano but other comic books too. And the official website is stationed HERE.

A rare first edition of the Beano has been sold at auction for £12,100, setting what is thought to be a new UK record for a comic. To the surprise of the cognoscenti of the comic world, it sold for over 25% more than what it was expected to reach, with the last known auction of a Beano No 1 fetching £7500 in 2002. 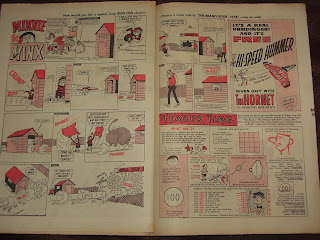 The comic was collected by a tea-boy working at the Beano’s publisher’s, DC Thomson of Dundee, in 1938 and had been kept carefully by his family ever since before being offered for auction late last year. The canny youth had even written “KEEP FIRST ISSUE” on the top of the front cover in light pencil.

Now when I was a kid there were two kind of UK boys comics - the action orientated such as Battle and the funnies such as, The Beano. Certain comics were a mixture of action and funnies but for this post I have drawn a distinction between the two. As far as I can remember there were several rivals to The Beano during the Seventies - Whizzer, Chips and Cor but The Beano was, I believe, outselling them all.

There were two major comic publishers - D C Thompson who published The Beano and IPC Magazines who were responsible for Whizzer, Chips and The Eagle. I can't really recall many others at the time - I think the 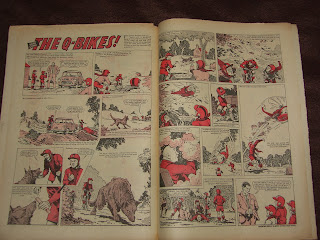 Walt Disney characters were licensed to another UK company - perhaps someone can clarify this.

Neither Marvel nor DC had really made much input into the UK markets during the early to mid seventies. Marvel characters were published under licence by a UK publisher - we had titles like Mighty World of Marvel and The Defenders. And I remember the Planet of the Apes, Star Wars and Dracula Lives comics were done by Marvel. But I'm not sure which British company produced them for the UK market. 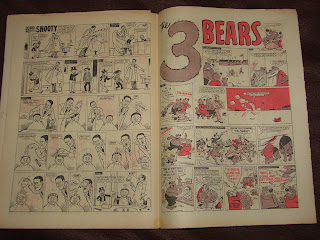 However for the most part in the UK it was D C Thomson and IPC Magazines that dominated.

The back cover is taken up by, perhaps The Beano's best know

character - Dennis The Menace. These days the character is on the front cover of the comic but back in the day it was very much a case of keeping the best till last. The character would eventually get his own fan club, a spin off comic, several TV shows and would even be the star attraction at the Beanoland theme park. Yep the comic is so popular that it even has its ow theme park - Beanoland . The park closed in August 2009 for revamping but it will reopen in 2010. 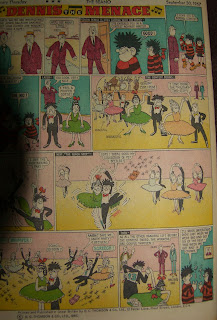 Email ThisBlogThis!Share to TwitterShare to FacebookShare to Pinterest
Labels: dennis the menace, the beano

Possibly, the biggest competition Beano and Dandy had was 'The Beezer' - in fact there was a time when if a kid didn't buy all three then there was something odd about them. 'Pop, Dick and Harry' being one of the popular strips.

.. and there was Topper, Valiant, Ranger, Eagle, Look and Learn, Smash, Pow, Wham, Fantastic and Terrific (all of which featured the Marvel characters right through the 6os - and even the great TV 21 eventually ran Spiderman reprints), Scorcher,Tiger, et al and of course DC Thomson's own 'Sparky'- with possibly the most racist depiction of an ethnic character since the Beano's own 1950's 'Missisippi Max and His Big Axe', known in the description along the top of the page as 'the Coon With A Tune'.!!!'
Ah, such innocent days!

BTW: I have a full set of the 1950s Beano annuals, a few of which featured 'When The Bell Rings' the strip that eventually morphed into the Bash Street Kids - one of which I have autographed by the great man himself: Leo 'genius' Baxendale! Leo of course was responsible for so many classic strips - from Minnie The Minx through Frankie Stein and up to and including my favourite, 'Jonah, Jinx Of The seas'.
Leo of course also singlehandedly drew the first few issues of Wham in the early 60s when Odhams enticed him away from DC Thomson and all things North.
Magic.

John - I wasn't aware of that When the Bell Rings - would love to see scan of that.

You may have seen the recent news that Disney has purchased Marvel Comics for four BILLION dollars. Standy for movies featuring the Marvel characters.

Oscar - check out yesterday's post for the official Disney statement