CUSTER OF THE WEST 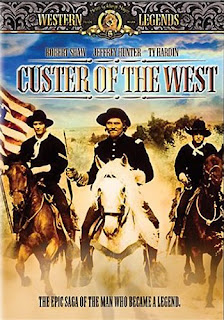 Historically inaccurate but quite spectacular bio-pic telling the legend rather than the facts surrounding the life and death of General George Armstrong Custer and culminating in the infamous last stand at the Little Big Horn.

Robert Shaw's Custer is a man at odds with his direct superiors and showing sympathy for the plight of the Indians. In one early scene General Sherman even admits that taking the lands in the Dakota territory is nothing short of theft and murder but nevertheless, the newly formed United States want the lands for expansion and development and what must be done, must be done.

The film was one of the few made with the Cinerama process which doesn't really transfer well to the DVD medium but at least there are no visible lines on the screen and it does look like a decent enough transfer.

If the fact that it's not historically accurate doesn't bother you and you can watch it as an epic western then you'll be in for a treat. The performances are good all around, the photography brings out the beauty of the landscapes and there are some breathtaking action sequences.

Shaw was a superb actor - on screen and stage - and I thought his portrayal in this film was excellent. He was also an accomplished novelist and playwright. Sadly, died too young.
Nik/Ross Morton

And of course Shaw is the only guy who ever looked like he could actually win in battle with James Bond.