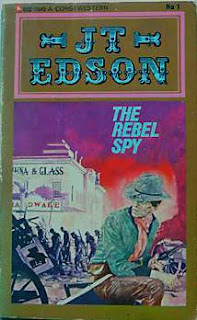 I'm not sure if this is actually J. T. Edson's first western since various Internet lists place it at different positions but it is marked as number 1 so I suppose it must be. Perhaps some knowledgeable western fan can let me know where this actually comes in Edson's remarkably large canon. I think that the numbering on the book is the chronological order of the books but the dates inside the book are of little help. For instance they all seem to be marked as 1968.

I bought a stack of these books - 77 titles in all - for £50 from a second hand shop a few months ago (see photograph below) and have only now gotten around to tackling them.

Now again I'm not sure (Each Internet list contradicts the other) but I think the books, all consecutively numbered from 1 - 76, are the entire works of this prolific British western writer. Again maybe one of The Archive readers will have more info. 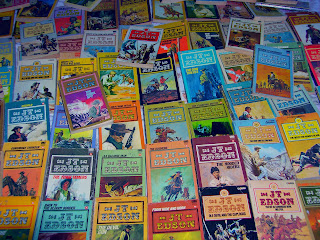 Still this purchase represents a bargain for any western fan and book collector.

The book takes place in the late period of the Civil War with Dusty Fog being teamed up with female spy, the rebel spy of the title, in order to foil a Union scheme to flood the Southern states with counterfeit money in order to destroy their already weakened economy.

General "Ole Devil" Hardin knows that the forging plant must be destroyed but the problem is that it is situated in Union controlled New Orleans. He needs an expert to get behind enemy lines and do the deed and so he selects Belle Boyd, a beautiful woman with a vicious right hook and a particular skill at operating with stealth. She teams up with Dusty Fog of The Floating Outfit and together they come up against the might of the Union army.

It's strange that I've never read Edson in the past since his books were always visible in the shops, alongside Louis L'amour, George Gilman, Oliver Strange and a few others, when I was a kid but maybe it's for the best since these books are all new to me and I've got quite a bit of reading ahead of me to get through the lot.

I enjoyed this book very much and I know that Dusty Fog, Ole Devil Hardin and Belle Boyd are characters that pop up again in later works so maybe I'll have more to say when I get familiar with the characters, but as a stand alone western this book was bloody good fun.
Posted by Gary Dobbs/Jack Martin at 02:28

I think Edson wrote in excess of a 100 books 'cos there is a book called 'J.T's Hundreth'. I seem to recall that there were 126 titles in all but not all of them westerns. Also, I believe, there are some American titles that were never published in the UK

RAY - From what I can gather the American ones rather than unique titles were UK ones that had been retitled.

What an epic world to jump into! Not being familiar with Edson, I'm intrigued by some web articles which suggest that he (like Philip Jose Farmer) sometimes tied his characters in with other fictional characters (apparently there's even a link to Tarzan somewhere in there). Do keep us posted!

I went on an Edson binge about twenty years ago and read probably half of his books. In general I discovered that the earlier ones were better. I believe his first book was published in 1963. As Richard mentioned, Edson did like to tie his books in with other fictional creations, and all his books are connected with each other in a long, complicated chronology. He attended several WWA conventions and had a reputation as a very colorful character. I met him at one of those conventions and enjoyed talking to him. I haven't read any of his books in years, though. I ought to get around to that.

Readers with a taste for Edson's approach to the western might like to know that researcher Steve Holland ran an interesting piece just last Sunday at bearalley.blogspot.com . The Town Tamers by Jeremy Briggs casts some light on Edson's early work.

I've never been able to get into JT Edson. I don't really know why. I only found out a few years ago that he was English and hailed from quite near me. I think that actually insipred me to take myself seriously (did I really say that? Ha! I don't think so). Until then I'd felt like a fraud thinking I could write westerns when I hadn't even been to America. Then I read that neither had Edson for much of his writing career. Anyway, I'm going to shut up now. :-)

Thanks for all the info guys and gals - I can't figure how I missed the Bear Alley piece so thanks Keith for pointing me over to that. And Jo course a Brit can write westerns otherwise all SF writers would have to come from Mars or thereabouts.

I know that now. I was younger then. I believed in Santa Claus and everything. ;-)

You mean there's no Santa

Joanne, You've given me the courage to confess I gave up on Edson after trying just one book. All those pedantic footnotes! When I looked inside others and saw more of the same, I decided I just didn't have what it took to appreciate his work.