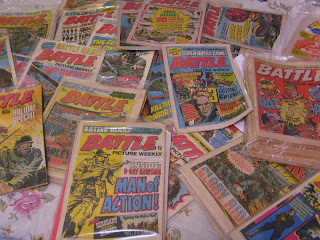 Not strictly a forgotten book but with a little bending of the rules, I'm looking at a British comic book - Battle Picture Weekly was a high point of my younger days. I never missed an issue but my mum threw my vast collection out many year ago. However with the help of Ebay I've been able to build up a decent collection (pictured) for when I want to revisit those days - the amazing thing is the comic reads just as well today as an adult as it ever did.

The comic was first published in 1975 and went on all the way upto 1988 - it merged other titles into it from time to time and was known as Battle/Valiant, Battle/Action and even at a low point Battle/Action Force. It was eventually merged itself into Eagle and eventually disappeared from the shelves.

Most of the comics stories were World War II based though there were some notable exceptions such as Pat Mills' excellent Charley's War which was set during the first world war and is often called the best comic strip in history.

An early classic was D-Day Dawson - which featured a sergeant who took a bullet during the D-Day landings. He survived but the bullet was too close to his heart to be removed and would eventually kill him. He fought on with reckless abandon until he eventually fell. The last story is pictured below (click on image for readable version). 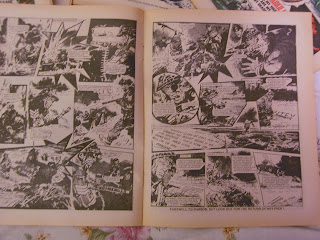 Other early faves were Panzer G-Man and what was unusual for a UK Comic of the time was that it looked at the war from the German POV. The comic would later repeat this with the excellent Hellman of Hammer Force.

Titan Books have a graphic novel planned Best of Battle for June 2009 but this title has been put back several times so I won't get too excited until I actually see it in the shops.

The thing that was different about Battle was that it was less "gung ho" than other titles of the period and often showed warfare with a grim and gritty realism. Charley's War was especially known for this and often showed men being shot for being cowards when these days they would be treated for trauma. 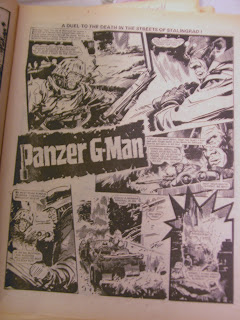 Rat Pack, based very heavily on the movie The Dirty Dozen was another early favourite. You guessed it - it featured a pack of convict soldiers who had no choice but to fight the Germans in order to save themselves from prison or the firing squad.

So that's it Battle Picture Weekly. 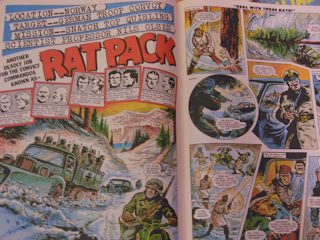 Posted by Gary Dobbs/Jack Martin at 00:33

Battle Picture Weekly happened after I'd left that whole scene for New Zealand in 1967. Have you seen this site, Gary?
http://charleyswar.tripod.com/id10.html

I can remember Dave Hunt turning up straight from school to work for Fleetway (rather like I had done). He didn't have the moustache then and looked very boyish in a David Essex way. He was greatly encouraged by his friend and established Fleetway staffer, Peter Stewart. They'd both attended the same school.

Peter and I shared an office for a time. He was working on Air Ace Picture Library and myself on the text Sexton Blake Library. Later, Peter "moonlighted", writing scripts for me after I'd gone on to edit at Micron (Combat Picture Library) and then Odhams Books (Boys' World Annual). Peter became editor of Shoot! and ultimately the press officer for the West Ham Football Club.

Really great article Gary, and love the photo. I had some favorite serials I followed when I lived in the UK when I was a kid, but I can't even remember the names of the books now, so finding them would be tough. Sigh.

Laurie - where in the UK did you live and for how long?

In Crawley, 1968 - only for six months. I hated leaving. My stepfather worked for an airline and at that point was based out of Gatwick.

I had Battle from issue one, sadly long gone. Johnny Red was my favourite. Thanks for the memories...

Neat stuff! I remember seeing a couple of these years ago at the San Diego ComiCon and not knowing what they were. Did the same creators write & draw for any other genre of comics (i.e.--super hero, western) too?

As a Yank, I've never heard of this title. As a huge fan of WWII comics over here (Sgt. Rock, GI Combat, etc.), I'd love to read some UK comics. I'll keep my eye out for the graphic novel collection. Thanks for expanding my brain today.

Richard - a few of the Battle creators moved onto 2000ad, notably Pat Mills and John Wagner and from there towards some American work. Course John Wagner is best known as the co-creator of Judge Dredd.