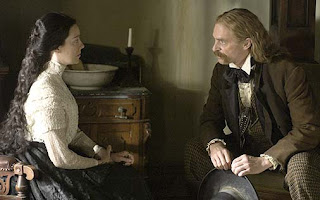 McCall and Hickok are back at the poker table, and this time, it's Bill who cleans out the foul-mouthed McCall. Rising from the table, McCall begins a typical stream of insults, but Cy Tolliver stops him, and Bill tosses him a dollar for a meal. Leaving the saloon to get some air, Hickok visits Bullock, who is in the process of building out his hardware store, even at three in the morning. The two exchange quick pleasantries, and the mutual respect between the two is apparent.

In the morning, the body of Brom Garret is returned to Deadwood after his "accident" at the hands of Dan Dority. Alma, his widow, immediately suspects foul play, and enlists Doc Cochran to perform an examination of the body. Her suspicions grow further when the Doctor won't completely rule out foul play, and Farnum, prompted by Swearengen, makes an offer on the claim that's supposed to be pinched out.

Cy Tolliver recruits Doc Cochran to take care of his whores, paying him substantially more than Swearengen does for the same services. Soon after, a man named Mr. Cramed enters into the Bella Union throwing around cash, earning him extra attention and services from Tolliver. Moments later we see that Cramed and Tolliver are acquaintances and have run scams together in the past.

Alma pleads to Wild Bill, begging him to help solve the case of Brom's murder and bring justice to those that may have done her husband wrong. Hickok heads to The Gem to question Swearengen, but as usual, Swearengen is able to deflect any inquiry directed towards him. Hickok takes an alternate approach by intentionally accepting a bribe from Swearengen. Wild Bill takes Swearengen's money and then enlists Bullock to do a review of the Garret gold claim. Bullock agrees to help, but says that he'll need to bring in somebody from Montana to do the work.

Ellsworth comes into town and lets Dority know that he's more than willing to mind his own business regarding the "accident" befalling Brom, if that keeps him from getting murdered himself. Later, Trixie tells Dority to leave Ellsworth alone, and he grudgingly agrees. Meanwhile Swearengen tells Farnum that he believes that "Hickok's got to die if I have to kill him myself..." Shocked, Farnum convinces his boss that he's got too much on his plate for such an ambitious idea.

Back at the hotel, Andy Cramed has fallen ill in his hotel room, and Joanie fetches Doctor Cochran to attend to him. Crame is in bad shape, delirious, and Cochran becomes very concerned.

Exhausted and nearly incoherent, Jack McCall tells the story of his poker showdown with Hickok to his pals at Nuttall's; even these world-weary men are concerned by what they see. Later, returning to the saloon wild-eyed, the long-simmering anger has come to a boil. McCall strides up to the poker table and shoots Hickok in the back of the head. Word spreads quickly through town, as people take to the street, and McCall is immediately apprehended. Drawn almost by instinct, Bullock and Calamity Jane find their way to Nuttall's saloon, but an era has already ended: Wild Bill Hickok is dead.


(Course those of us who knew the history were aware that Hickok would die, murdered by McCall, but for the casual viewer who merely saw Hickok as one of the main characters his death, so early in the series, was shocking. By now the characters were getting into their swing and the themes that would control the arc for the rest of the series were set out in this episode.)

Episode 5 - The Trial of Jack Mccall

The line to view the body of "Wild Bill" Hickok stretches throughout town, and equally long is the line of people 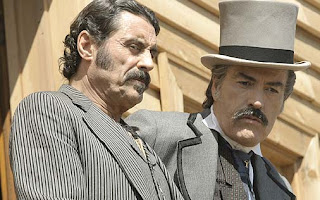 volunteering for jury service for Jack McCall's upcoming trial. Swearengen realizes that the high-profile trial could bring unwanted attention from the U.S. government, since Deadwood technically doesn't have the sovereignty to hold such an event.

Back at the Grand Central Hotel, Alma Garret is still caring for the Metz girl, but the widow's withdrawal from laudanum is beginning to take a toll on her and she looks for help with the child. Still, Alma is determined to investigate the value of her claim. Meeting with Bullock, she signs a proxy giving him authority over the property, as Hickok had recommended. Swearengen is infuriated to learn that the former marshal has become involved in the matter, and he and Farnum devise a plan: Trixie will offer to help with the Metz girl, using the opportunity to secretly slip Alma some of Al's dope.

At the Bella Union, Andy Cramed is still terribly sick, so Tolliver makes the call to have him taken out into the woods and left for dead. One of Cy's minion's isn't thrilled with this plan, but realizes that he has no choice in the matter and does as he's told. As this is going on, Doc Cochran visits the Bella Union to check in on the patient and learns of Tolliver's callous treatment. The Doctor warns Tolliver of the need for medicine for the upcoming epidemic, and the saloonkeeper reluctantly sends someone to Fort Kearney in Nebraska.

Before the trial begins, Bullock goes to see McCall, who is imprisoned in Mr. Wu's slaughterhouse. After some tense conversation, Bullock ends up with his hands around McCall's neck, but the accused is saved when his lawyer steps in. Bullock leaves, and McCall and his lawyer begin to plan out their defense strategy.

Trixie arrives at Alma's room and takes an immediate liking to her and to the Metz girl as well. She also recognizes that Alma is going through withdrawal. Defying Al's wishes, she doesn't give Alma Swearengen's dope, but instead visits Doc Cochran for some medicine to ease the widow's shakes.

At The Gem, the trial begins, and McCall's defense-concocted by his attorney-is that he was avenging the death of a brother. The proceeding has not gone far, however, before Swearengen pulls the judge aside for a little talk. Upon reconvening, his honor sends the case quickly to the jury. They quickly return a verdict of innocent. McCall is set free.

The residents of Deadwood that aren't hovering near the trial attend Hickok's burial. Joanie, angry with Tolliver over Cramed, goes to the funeral to annoy him; Bullock and Star are both at the sad event, which is presided over by the Reverend Smith. Star takes notice of Smith's pale appearance and stranger-than-usual demeanor, but Bullock doesn't seem to care, as he's still seething over the death of Wild Bill. Bullock's demeanor doesn't improve when Merrick arrives, bringing the news that McCall has been found innocent.

Calamity Jane is absent from the burial, choosing instead to watch the event from a distance. She doesn't observe too long, however, as she's managed to find Cramed in the woods and, in a drunken stupor, has chosen to take care of him. His condition continues to worsen, but in her state, Jane is almost oblivious to just how badly off the man is.

The trial concluded, The Gem is once again filled with those seeking women and booze. Among those celebrating is Jack McCall, but Swearengen makes it immediately clear to Hickok's killer that his continued health depends on leaving Deadwood immediately. McCall takes the advice and gets on a horse. But not far away, Bullock's anger is still boiling. After a few words with Star, he makes his decision: he is going after the murderer of his friend. 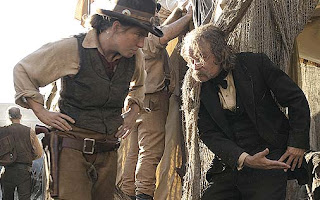 On the trail of the murderer Jack McCall, Seth Bullock is ambushed. Though he manages to kill the Indian who attacked him, Bullock is beaten and bloodied and soon collapses.

Back in Deadwood, a john falls ill at the Gem, showing the same symptoms that felled Andy Cramed. Worse news follows when Joey, Tolliver's messenger, arrives back at the Bella Union without having made Nebraska. He, too, is becoming ill and was not able to bring back the smallpox vaccine. Doc Cochran tells Swearengen about the outbreak, but the news is kept quiet for the time being.

Smallpox is not the only thing on Swearengen's mind; he is still determined to steal Alma Garret's gold claim. He sends Farnum to spy on the widow to find out if Trixie has succeeded in re-addicting her to dope, but Farnum reports back to Al that she's not high. Al confronts Trixie and makes it clear that she is to dope the widow--or else.

Knowing that Swearengen means business, Trixie tells Alma to fake intoxication whenever Farnum shows up. Alma understands, playing the part perfectly, and Al is immensely pleased when he gets the report.

Calamity Jane returns to Deadwood, and heads to Cochran's office to get an update on the Metz girl. The doctor doesn't want to deal with Jane, but is surprised when she tells him that she knows about the smallpox. Jane explains that she's been caring for Cramed, and Cochran realizes she may be immune to the disease.

Despite the growing number of smallpox cases, it's business as usual at the Bella Union, where Ellsworth is spending a lot of time at the craps table. Tension grows between Tolliver and Joanie Stubbs, and when she shows a soft spot for Ellsworth, the boss makes it clear that she needs to improve her work in the Union-or he'll give her a reason to be morose.

Outside of Deadwood, Charlie Utter finds Bullock, still unconscious from the attack. Charlie cleans him up, and when Seth comes around, he tells Utter about Hickok's death. Utter is eager to make his way back into town, but Bullock presses him to carry the corpse of the Indian to a proper resting place in a show of respect.

Realizing the growing smallpox threat, a small group of Deadwood's town leaders meet at the Gem. It is decided that they will put together money to pay for riders to get the smallpox vaccine. They also decide to set up a tent for those afflicted.

In his newspaper, Merrick-with heavy editorial influence from Swearengen--tries to minimize the fears that will no doubt arise when the rest of the town learns of the outbreak. The tent is erected for the sick, staffed by Cochran, Reverend Smith and Calamity Jane.

(The character of Calamity Jane is a million miles away from the Doris Day version and in this episode she comes into her own as she nurses the smallpox victims, which was based on actual historical fact.)