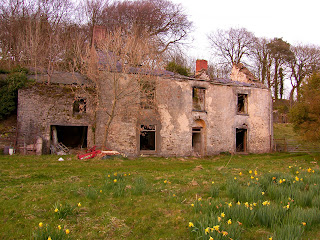 It's actually late Sunday night as I write, but I'm away tomorrow and don't want to miss Travis' My Town Monday meme and so, better early than on time, I plan to take you into childhood nightmares with The Old Dark House. 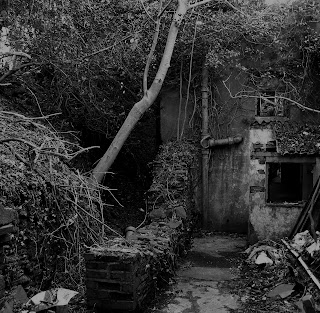 The house stands on the Mountain above Tonyrefail and has been there forever - I can never remember it looking any different than it does now and when we were kids we used to scare ourselves silly with ghost stories centered around the old dark house. 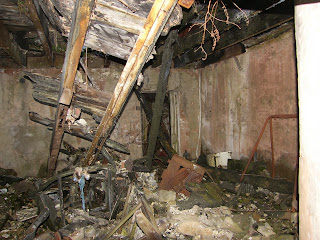 As you can see from the images nature has long claimed the structure and with no regard for the building skills of man, roots grow through walls, moss clings to bricks that are turning to dust, cobwebs fill the window frames and one particular tree is growing upwards out of what had once been the living room.

The story we were told as kids was that once an old farmer called, Goochey had lived there and one night he had caught his wife with a farm labourer and he had gone berserk. He butchered both wife and lover with an axe and then proceeded to cut up his daughter and several other farm workers. He then hung himself and on dark nights moaning and dreadful blood chilling screams could be heard coming from the old house.

Now as a kid in the late Seventies, during the long summer holidays me and a few mates would camp out. This was perfectly normal for the times and our parents never considered it to be dangerous in any way - everyone did it. 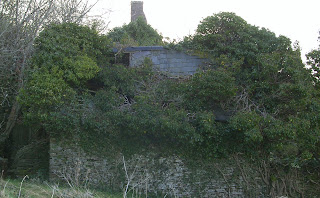 Anyway I was about twelve or thirteen when I took a bet that I would camp alone in the old dark house. The bet had come about because I had boasted, that I didn't believe in ghosts and the dark held no fear.

As so, as had to happen, my mates made me a wager that I wouldn't stay in the old house while they camped in the meadow below.

'No worries.' I said and then privately worried.

As so after dark - I think around midnight - I left my mates and with only my sleeping bag, some matches, a few candles and my swiss army knife, I trudged up the mountain towards the old house. Now the bet was that I should sleep in the house but I couldn't bring myself to enter the sinister structure. And so, figuring no one would know I set up camp in the garden, by the far fence, beneath a tree. 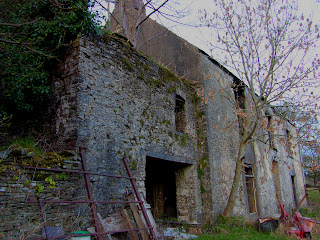 Maybe a hour passed before my imagination brought the ghosts to life and every single night sound, of which there were many, became harbingers of terror. I heard someone moving in the ferns and my heart started beating a jig. I expected Goochey to emerge from the ferns, blood splattered axe in hand.

And then I heard moaning but this was not imagined, nor the wind playing tricks with my nerves - this was real. I think I screamed and then the moans turned to laughter and I went nuts. The boys had snook up on me and where hiding in the ferns, trying, and succeeding, to freak me out.

Suffice to say I ended up sleeping back down in the meadow and the bet was declared void, since them trying to scare me was not in the deal.

Since then I've researched the old house and discovered that there was a murder at the house, though not as gory as the stories. A farmer in the late 1930's shot his wife and then himself and the house has stood empty ever since. No one seems to know who actually owns it.

The pictures here were taken this afternoon and show the old ruins as they stand today.
Posted by Gary Dobbs/Jack Martin at 13:55

Email ThisBlogThis!Share to TwitterShare to FacebookShare to Pinterest
Labels: my town monday, travis

What a great story. Old houses are wonderful (we live in one from the 1830's) and old uninhabited ones with a story are terrific. Sounds like quite an adventure.

It looks lovely even if it is in ruins. Somehow it suits its setting.

That house looks so spooky! As a kid (or even now!), I wouldn't have had the nerve to try to spend the night there!

I love old houses, but you must have been a brave or stupid kid to camp by yourself!!!!

Great story. The roots and all make it that much more spooky.

Think it was stupidity rather than bravery.

Great story Gary. I assume you got razzed for not camping inside, lol.