The old church on the hill 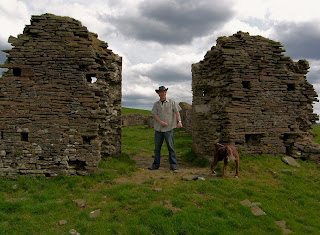 High up on Myndd Y Lambeth, on a majestic looking mountain that towers over my hometown of Gilfach Goch, there stands the ruins of a Twelfth century Church. The last time the church was used was in the eighteenth century and since then the building as fallen into ruins - many years ago farmers took the stone from the walls to build the dry-stone walls that criss -cross the fields and now there is hardly nothing left of the old structure.

The photographs here were taken one week ago.

The church during the eighteenth century was known as St. Peters' but before that it had another name which is lost to time. It stands in a secluded spot and would have been visited by people from miles around - imagine how pious they must have been to walks miles over the mountains to visit the place of worship. 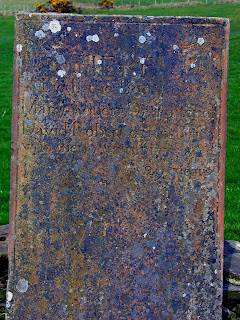 There are several gravestones with the inscriptions still legible and these all come from the same family - Roberts - the oldest person died at 40 years of age and the youngest was only two months - all these deaths were in the same year so it was probably due to some sort of plague.

There was actually a church on this site in the sixth century which was when, local legend tells, that Arthur was buried in a tomb here. The ancient Welsh ruler had been victorious against the Romans. 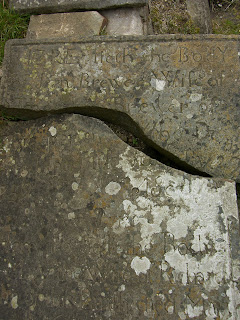 I remember many years ago the church grounds were excavated in a dig that was intended to locate King Arthur's tomb - there have been many theories to where the king was actually buried, if indeed he did exist. But the original Arthur legends are indeed Welsh and if the ancient ruler did exist than there is no doubt that he was a Welsh ruler. 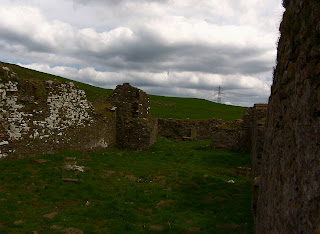 I visited the church during the dig and actually saw an exposed grave - they had dug down alongside the grave and exposed a skeleton - what amazed me is that the skeleton was a sepia colour, the bones having been coloured by the red earth over the centuries. I was expecting the bones to be glowing white as they always are in films. It was a pretty unique sight, I tell you.


I often walk these hills with my dog and I love the peace and tranquility surrounding the old chucrh ruins.There are also stunning views and you can see as far as the Bristol Channel
Posted by Gary Dobbs/Jack Martin at 00:51

It really is beautiful country out there. The Arthurian legends are certainly Welsh in origin with Snowdonia claiming claiming the lake there (forgotten the name) was where Excalibur rose from.

My great, great grandfather was Welsh, but I don't know where he was from. His name was Tom Morrison. He was a coal miner. Came to the US in the 1870s but died of black lung in his thirties anyway.

That's some scenic country. Grab a church wall before it's too late.

My mother-in-law grew up 5 miles from the Welsh border, in Chester. She has fond memories of the countryside there.

Beautiful. Such a great mix of history and legend. Do you know --were the original stones quarried nearby or carried up the slopes?

Beautiful pictures. Was your dog along to try inspecting the sepia bones? With so much history and the many plague graves, even if Arthur weren't there, I'd think it would feel somewhat otherworldly. Then again, most "historic" American sites date from a couple centuries ago, not a millenium, so what would I know about it. I'll have to go visit the pyramids and reconsider.

Such beautiful county side. I love ruins like that, sadly the west part of Canada is so young.

I'm curious about the name gilfach goch. You should do a post in it's origins.

Travis it mean literally red valley or red river valley. And I may do its origins which I'll have to research. I know the first ever pit was sunk by a guy named Christmas Evans.

I remember Mr Christmas Evans. His son, Iestyn, had a thing for Angharad Morgan.