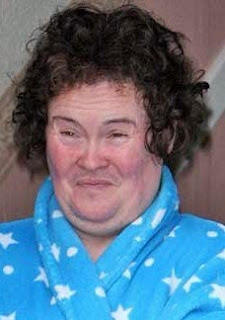 From the Associated News - Susan Boyle is being tipped to sing title of the next James Bond movie, it has emerged.According to reports, composers of 007 hits and official Bond fan clubs want the 48-year-old to star on the unnamed 23rd Bond movie, reports The Daily Star.

Monty Norman, who composed the classic Bond theme and the Dr No soundtrack, said it is likely the Bond bosses have given it “serious” thought.

He said: She has the right kind of sweeping voice.” (ANI)

Posted by Gary Dobbs/Jack Martin at 01:59

Has the title of the new Bond movie been announced?

No - not as yet. Shouldn't be too long though.