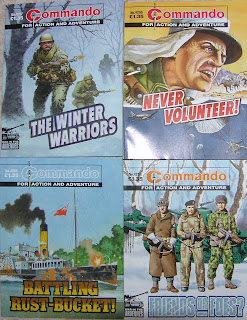 The latest four titles from Commando Books are now on
sale.

Two of the titles are set in the Ardennes - Friends or Foes, written by Peter Grehan with art by John Ridgeway is set during 1944 with the German offensive using special units dressed in Allied uniform. The Winter Warriors, written by Ferg Handley and drawn by Garijo is set during the Battle of the Bulge.


It's back to 1940 for Battling Rust Bucket. The story written by Ian Clark with art by Gordon Livingstone tells of the Dunkirk evacuation and of the clapped out old paddle steamer's part in the operation.

Last but not least is Never Volunteer written by C.G. Walker, art by Ibanez and set during the North African conflict.

The books are priced at £1.35 each and are quite unique in the current market - well told, war stories just like your Dad used to read.
Posted by Gary Dobbs/Jack Martin at 02:22

Email ThisBlogThis!Share to TwitterShare to FacebookShare to Pinterest
Labels: commando