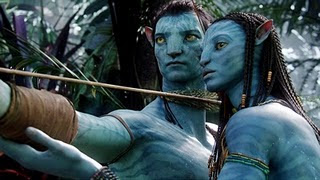 Spending £300 million to make a motion picture given the state of the world at the moment may seem obscene and perhaps, in many ways it is, but early reports of James Cameron's Avatar is that it will change the face of cinema. So maybe the mega bucks were well spent.

However given its massive cost there is much debate over how successful its opening weekend stateside actually was.

This from WEEKEND BOX OFFICE REVIEW - The much anticipated and debated (amongst film nerds at least) Avatar debuted this weekend with $73 million. That's the second-biggest December opening in history, behind the $77 million debut of Will Smith's I Am Legend. In Avatar's defense, I Am Legend was an hour shorter, had a great tag-line that doubled as an easy-to-understand plot synopsis ("The last man on earth is not alone."), and had the added buzz of the debuting trailers for The Dark Knight. While Warner Bros. held its non-IMAX Dark Knight trailer off the internet until Sunday night, Paramount did Fox no similar favors, releasing its Iron Man 2 teaser online two days before Avatar's opening day. It's also worth noting that Avatar actually opened on fewer screens than many of the top December openings. On the other hand, Avatar debuted in countless 3D and mini-IMAX screens, which increased the general ticket prices to more than overcome the running-time and screen-count disadvantage. But Avatar did break one very notable record. It is the biggest debut in history for a completely unaffiliated original movie. By that, I mean it was not a sequel, not a franchise adaptation, not a literary adaptation, and not a star-vehicle. It's also racked up $159 million overseas, for a global total of $232 million.
Posted by Gary Dobbs/Jack Martin at 10:15

Email ThisBlogThis!Share to TwitterShare to FacebookShare to Pinterest
Labels: AVATAR

I know I'm going to go see it. sigh....it just pissed me off to see it advertised in regular tv shows. I protested by not going to see it opening weekend. Silly, I know.......a drop in the bucket. It's just sometimes I get tired of being herded like sheep. :)Bea

It's not my type of film but I thought I should report on it since it seems such a big deal at the moment. And a lot of the magazines I read say this is the way the future of cinema will go. Me I prefer the old tightly plotted stories of the Golden Age. Mark Kermode said on Radio 5's film show, that Avatar was too long and dragged in the middle but some of the visuals were - WOW!