This was book 18 in the long running adult western series. It was also until 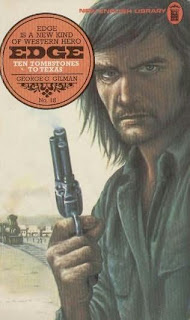 now, one of the few I had never read. As soon as I saw it on Ebay I snapped it up and read it in a few hours earlier this evening. As with all the Edge's it offers a quick, enjoyable, blackly humorous thrill of a read. The ability to be both comic and maintain a sense of urgency and excitement is something that is common to the entire series. And before you dismiss them as run of the mill formulic westerns, consider first the inventiveness of the often off-beat plots. Sure there's a formula here that mostly forms the backbone for most of the books but they always seem, to some extent, totally fresh. It matters now how many times Edge uses his cut-throat razor to dispense justice but of how he does it and the quality of the wise crack or pun that follows.

And this book is a case in point - one particular pun is so corny it's actually brilliant in the context of the story. In one scene after killing a man with the surname of Bean, Edge is asked what's happening. Edge points out that, 'it's like Santa Clause on Christmas Eve'. And then when pushed on his meaning he points out that, 'he's Bean and now he's gone.' There's another one later on that I'm not going to spoil - suffice to say it involves a little head.

The storyline here sees Edge once again drifting into trouble - this time he comes across two women who are travelling with a massive bull tethered to their wagon. Edge only wants to share their fire and perhaps a little coffee when a bunch of men ride into camp. The men, led by Vic Evans bring an argument with them concerning the two women and the prize bull. A little gunplay follows and the only fatality at this point is Edge's horse which pisses the half breed off somewhat. However Edge is overpowered and his guns taken - he is told he will be able to collect his weapons from the sheriff in the next town. Once the men leave, taking the bull with them, Edge rides with the two women and hears the story of how Muriel's late husband Barnaby, a no good gambling critter, bred the bull which is worth, believe it or not, fifty thousand dollars. Vic Evans claims the bull belongs to him since he won it off Barnaby in a card game but, as Murial points out, the cards were loaded and so after her no good husband was killed she and her companion, Matilda stole the bull back and were taking it to a rancher in Texas who is willing to pay the fifty big ones for the rare breed. Later when Edge comes up against the first of the men, the aforementioned Bean, and kills him in a gunfight it turns out the women are carrying ten tombstones in their wagon, all marked with the words - DEAD FROM MURDERING BARNABY TREE.

Edge, now involved up to his neck, agrees to aid the women in riding down the men and recovering the bull for a third share in when the bull is sold to the rancher - soon there will be ten tombstones on the way to Texas. Not for nothing were the Edge books the best selling of the British western boom of the 70's/80's. On times they are extremely violent but this is always countered by the black humour which, whilst often corny, is never forced. They are not meant to be serious westerns but they are some way off being parodies. And the character of Edge does develop as the series goes on - for instance several of the books in the series are prequels set during the Civil War when Edge was still known as Joshua Hedges and these give a history to the character that make him seem real and allow the reader some sympathy for the cold hearted bastard he becomes in the regular series books. The books also have a unity which hold them all together as a overall story.

TEN TOMBSTONES THEN, is another cracking read in this, my favourite all time western series. The cover on this book looks to be done by a different artist than most of the other book. The artist is not credited anywhere in the book so I can't be sure but the image of Edge looks more fuller in the face then was usual. Anyone know who drew this image and was it the same artist throughout the series?
Posted by Gary Dobbs/Jack Martin at 15:16

Hi Gary,
This was the first Edge tale I read and it still sticks in my mind for just the reasons you've stated. I've read others since and have enjoyed them all. Plus others of the P. Cowboys gang.

I too love much of the old P. Cowboys stuff. I used to devour them at a vicious rate as a kid. Edge was always my favourite and still is. When my mates were playing Star Wars I was playing Edge.

Haven't gotten this far yet. I've got all the early ones in a complete set and I think I"m on about 7 now.

Reckon that cover could have been by Dick Clifton-Dey (looking at the lighting, face lines, and background). Tony Masero took over latter and re-did most of the books.

For those intending to read this book in number order with the rest of the series; Ten Tombstone to Texas should be read before #17 Vengeance Valley as the publisher put them out in the wrong order.

Steve - somehow I knew you'd know who did the image. I was going to email Terry and ask but I figured Archive readers would know.