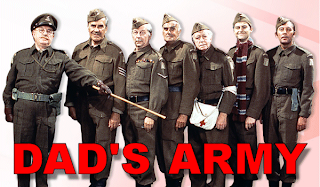 e best known ensemble casts ever to appear on British television. I'm not sure how well known the series is in other countries, though I suspect it's Brutishness would make it unsuitable for most other territories.

The show centered around the Home Guard - initially called Local Defence Volunteers until an act of Parliament changed the name to the Home Guard because the press were making cracks that L.D.V actually stood for Look, Duck and Vanish. The leader of the squad is the pompous Captain Mannering, played wonderfully by Arthur Lowe. But Dad's Army's strength, and what makes it still watchable, is that all the supporting cast were so well realised. Clive Dunn was exceptional as Jonsey while John Laurie played the Scottish undertaker, Fraizer as a kind of Celtic Bela Lugosi. Other semi -regulars characters were the vicar, the church warden and the ARP Warden played by Bill Pertwee, cousin of Dr Who Jon Pertwee who was actually first choice to play Captain Mannering.

The first series, rarely shown on televison perhaps because it was made in black and white is well worth seeing - We see the initial troop coming together, including some fresh faces who didn't

stay the course and were written out or simply vanished from the screen. The core group of characters though are all present and correct in the first episode. The DVD also contains the surviving three episodes of series three - these were the days when the BBC wiped shelves and shelves of tape losing many shows forever - and sound recordings of the remaining three episodes which do not exist in any other form. There is also an interesting documentary that looks at the policy of wiping old shows in order to reuse the tape.

Dad's Army is one of the greatest UK sit-coms ever made and all of the series are currently available on DVD but these formative episodes, rarely seen, are especially welcome.
Posted by Gary Dobbs/Jack Martin at 10:15

I've loved this show ever since i first saw it on a local PBS station.
Sadly it's not out on R-1 DVD.
Wonderful cast, especially John Le Mesurier and Clive Dunn.

Still the best line in the history of comedy!