Justed binged the final season of Bosch on Amazon Prime - it's been a great show and now whenever I read a Bosch thriller I see Titus Welliver in my head and that's no bad thing. 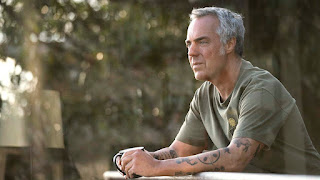 “Ideas come to me in dreams and wake me up,”  Michael Connelly.

Bosch has been Amazon's longest running show, with seven excellent seasons available on the platform for those late to the party to catch up on.

The bestselling Bosch books by Michael Connelly have been popular for decades, and continue to remain so. For the first eight Bosch novels Harry Bosch carried a badge for the LAPD but then after quitting the force he became a PI and the series continued. Later on Bosch officially retired but was reluctantly brought back as an investigator for his half brother Mickey Haller.

Bosch will appear in a new novel, The Dark Hours to be published this November and Amazon have announced that there will be a Bosch spin off which will follow the detective through his PI period.

More Bosch...yes please, bring it on.

Below we have embedded the first shot from the currently in production Bosch spin off series.

From Michael Connelly's website:   IMDb TV, Amazon’s premium free streaming service, announced it has picked up a new spinoff series of Bosch. The new series will begin filming later this year with stars Titus Welliver, Mimi Rogers and Madison Lintz reprising their roles.The new IMDb TV Original will follow Harry Bosch as he embarks on the next chapter of his career and finds himself working with his one-time enemy and top-notch attorney Honey “Money” Chandler. With a deep and complicated history between this unlikely pair, they must work together to do what they can agree on – finding justice.“I am beyond excited by this and I think the fans that have called for more Bosch will be as well. To continue the Harry Bosch story and see him team up with ‘Money’ Chandler will be more than I could have ever wished for. And to continue our relationship with Amazon and be part of the IMDb TV line up will insure our commitment to providing viewers with a high-quality, creative and relevant show. I can’t wait to get started.”- Michael ConnellyIMDb TV is free. No paid subscription is necessary. IMDb TV is available as an app on Fire TV and Roku devices. It is a free Channel within the Amazon Prime Video and IMDb apps, and is available on the IMDb website. You can watch seasons 1-7 now on Prime Video.
at September 15, 2021