NO TIME TO DIE - THE BOND REVIEWS ARE IN. 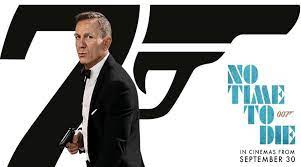 The Times critic said: "Craig is a towering charismatic presence from opening frame to closing shot, and he bows out in terrific, soulful, style."

The Guardian reported: "It is of course a festival of absurdity and complication, a head-spinning world of giant plot mechanisms, but the film as a whole is very enjoyable and gleefully spectacular".

Time Magazine said: "At two hours and 43 minutes, it's too long and too overstuffed with plot - more isn't always better. And it features one of the dullest villains in the series' history, played by Rami Malek in mottled skin and dumb silky PJs.But forget all that. No Time To Die, its flaws notwithstanding, is perfectly tailored to the actor who is, to me, the best Bond of all."

Screen Daily said: "It's certainly a film that breaks many of the canonical rules of the series, though not entirely to dazzling effect. There's plenty to gawk at, and to argue over, in this episode, yet No Time To Die is oddly lacking in pleasure or real wit."

The Hollywood Reporter wrote: "It may not rank up there with Skyfall, but it's a moving valedictory salute to the actor who has left arguably the most indelible mark on the character since Connery,"

Empire Magazine wrote: This is a Bond films that ticks all the boxes - but brilliantly, often doesn't feel like a Bond film at all. For a 007 who strived to bring humanity to a larger than life hero, it's a fitting end to the Craig era.