Action ramains one of the most controversial British comics - It was actually, banned, withdrawn from sale after complaints in the media resulted in questions being asked in Parliament.

The comic was devised in 1976 by Pat Mills, a man who enjoys the status of legend these days. It was intended to reflect the social changes and issues in the UK in the late 1970's and it didn't flinch in it's depiction of violence. Several titles were bandied about for the comic Boots, Dr Martins and Action 76 were all considered until the title Action was decided upon.Many of the stories in Action were what Mills called "dead cribs", essentially rip-offs of popular films, books, and comic heroes. Rather than being a straight copy, the "cribs" in Action had their own slant on the idea. Hook Jaw, for example, combined the graphic gore and shark anti-hero of Steven Spielberg's 1975 Jaws, whilst Hellman of Hammer Force was a Warlord/Battle-style adventure told from the point of view of a German Panzer commander and very much taking its influence from the hugely popular paperbacks of Sven Hassel. 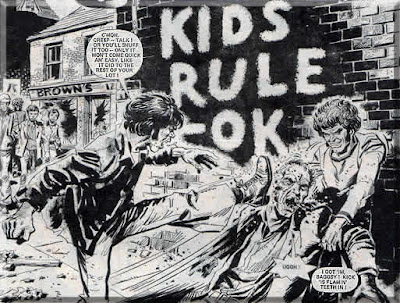 The first issue was published on 7 February 1976,  The comic was instantly popular, particularly for its gritty tone and graphic gore. Within weeks the media had picked up on the title's violent content. The London Evening Standard  and The Sun  ran major articles on the comic, with the latter  by dubbing Action "the sevenpenny nightmare" (the cover price was 7p). Over the next few months Action was the centre of a campaign led by Mary Whitehouse to censor or ban the comic. IPC eventually started to moderate strips in order to forestall possible boycotts by newsagent chains such as John Menzies and W H Smiths.
In September 1976 John Sanders appeared on the television programme Nationwide , where he tried to defend the comic from a vigorous attack by interviewer. Although Action remained popular, its days were numbered. Pressure within IPC's higher management, and alleged worries that the two major newsagent chains would refuse to stock not just Action, but all of IPC's line, led to the 23 October issue being pulped. 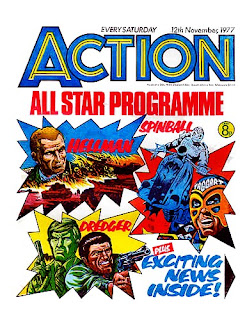 The title returned on 27 November (cover date 4 December), but the violence was toned down, replaced by a safer, blander feel. Stories like Hook Jaw were no longer drenched in blood and gore, but instead were full of safer and more reliable heroes, and traditional villains. Sales dropped drastically, and the last issue before merging with Battle was published on 5 November 1977 - dated 11 November. Battle became Battle Action until 1982, at which point the Action name was dropped entirely.