The Return of the Saint 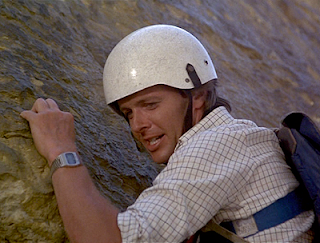 Opening with our fresh new Saint clinging precariously to the side of a mountain that really doesn't look that daunting - we are then given a voice over from Mr Templar in which he mentions how important it is to choose your climbing partner carefully. Though he may have to eat his words when his particular partner betrays him by sabotaging the climbing rope - however we soon discover that this is a test by MI6 to see how Templar reacts. They are hoping to recruit Templar in order to send him out to rescue British secret agent, Selma Morell (played by the lovely Judy Geeson).

It's all good ITC type fun - these are the guys and gals who brought us the original Saint TV series as well as shows such as Dangerman, The Persuaders, The Protectors. In fact ITC's list of   fondly remember cult classics is endless - Joe 90, Stingray, Man in a Suitcase. 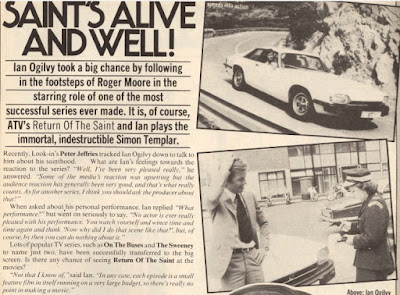 I vividly remember getting excited when the show was set to air. I was twelve years old at the time and had grown up with re-runs of the previous version of the Saint starring the always wonderful Roger Moore. There was a publicity frenzy for the new version, with features in not only the TV Times but Look In magazine and no doubt given the preponderance of beautiful ladies in the show, the Sun Newspaper would have made a big deal of the rebirth of the action hero. Look-In magazine was a comic book with strips built around whatever TV series were popular at the time - anyone of my age will remember the magazine which seemed to be on sale everywhere. These were the days when children still read comics, rather than buying them for the free gift attached to the cover.

Look-in was a children's magazine centred on ITV's television programmes in the United Kingdom, and subtitled "The Junior TVTimes". It ran from 9 January 1971 to 12 March 1994Look-in had interviews, crosswords and competitions, and it had pictures and pin-ups of TV stars and pop idols of the time. Its main feature however was the many comic strips of the favourite children's television programmes, all of which were being shown on the ITV network at the time. 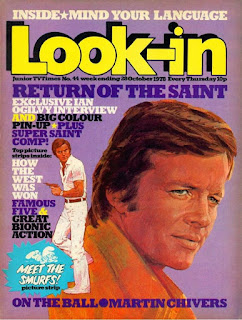 When the magazine began publication, it was edited by Alan Fennell and the strips were written by Angus Allan. Fennell left in 1975, and the art editor, Colin Shelborn, took over as editor. The covers in the 1970s were paintings by Arnaldo Putzu, an Italian working in London who had created many cinema posters in the 1960s, including designs for the Carry On films. His Look-in covers were mostly painted using acrylics. Wikipedia

Ian Ogilvy was perfect casting for the show - not only was he a fresh face but he was a fresh face who resembled a young Roger Moore - indeed had Moore quit the role of James Bond when he originally said he would that Ogilvy would have likely followed into Moore's shoes once again and took on the role of 007. Alas, that was not to be but although Return of the Saint is sometimes considered a flop given that a second season was not commissioned this is far from the truth. The show was sold all over the world and remains hugely popular today, even if it is overshadowed by the Moore version of the character. 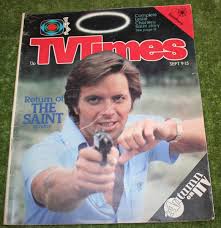 "What a disappointment the first episode of this much-publicised new series turned out to be." The Sun newspaper.

Now re-watching this first episode as part of the superbly packed Network DVD box set, I was surprised to see how violent the show actually was. Before ten minutes have passed several people are machine gunned to death at point blank, but it is presented as comic book violence - there is no blood and people fall neatly, without trauma when shot. In the age of shows like The Sweeney, this was perhaps not a wise move but this fact doesn't take away the superb quality of the series when taken as a whole. And the first episode is not as bad as the Sun newspaper made out - Ogilvy perfectly embodies the character and the climax is incredibly exciting with Templar punching, chopping and blasting anything that moves. 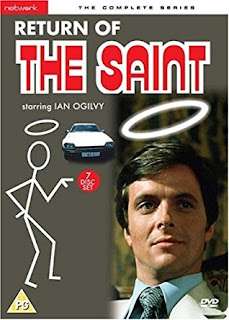 I'm looking forward to going through the entire series. The Return of the Saint is not as familiar to me as the Moore version, and I've likely only seen most of the episodes the one time and that was way back during the original broadcast. So in some ways this show is fresh to me.

The extra features on the DVD box set are superb - we get a documentary written and directed by foremost Saint expert Ian Dickerson, which features recorded segments from both Roger Moore and Ian Ogilvy as well as many other Saint luminaries. There is a wealth of PDF material which includes original scripts and magazine interviews from the time of the original show.

Now is the perfect time to Return to the Saint - the box set is currently available from Amazon and anywhere else DVD's are sold.

Email ThisBlogThis!Share to TwitterShare to FacebookShare to Pinterest
Labels: return of the saint, the saint