Growing up comic books were of vital importance - They mattered to a young boy. There were just another of the essentials needed for any kind of  life. As every young boy knew the true necessities for a happy life were food, water, shelter, assorted candy and comic books.

It wasn't like today where kids can grab a DVD 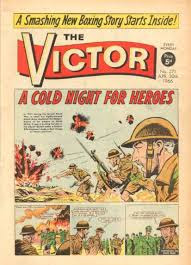 from a shelf, switch on a computer or fire up a video game. This was pre-home computer, pre cable television, (WTF is streaming) even VHS video tapes were still some time in the future.
We had three TV channels - two from the Beeb and one commercial station - entertainment, particularly for an imaginative young boy was thin on the ground. Sure we had our cartoons but they only played at certain times of the day, the rest of the time the small screen seemed obsessed with soap operas, game shows and current affairs. Hardly the material designed to stimulate young minds.All in all you'd think we were starved of exciting adventure stories designed to stir the blood, but there was one avenue open to us.
There was a medium offering wildly entertaining stories whenever the fancy took us.
That medium was the comic book - the newsagents shelves were stuffed full of books with titles like Tiger, Warlord, Battle, Victor, Action - they cost pennies (I think the average price of a comic book when I started buying on a regular basis was around 5p) and yet provided entertainment worth many times that paltry sum.In the far off United States (a country that seemed so exciting to any British kid) the comic book industry was dominated by colourful stories of super heroes, but in the UK super heroes, with very few exceptions, failed to take off.
If Superman's capsule had crashed down in Clacton instead of the Mid-West, then Kal-Ell would have been grounded from the off.
It wasn't that British comic books were any less fantastic, but  by and large the settings for our tales were far more grounded in reality. Of course we had our science fiction strips, Dan Dare and so forth but for pulse pounding adventure it was the war comics to which we turned. 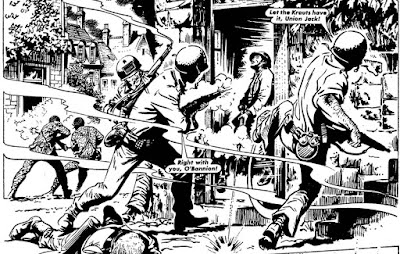 War comics were always popular in the UK - And for decades after the guns of the second world war fell silent, British kids celebrated our victory over the Nazis in wonderfully drawn, black and white comic books. Characters like Lord Peter Flint kept a stiff upper lip while besting evil Nazi spies, Union Jack Jackson fought alongside the Americans and usually got them out of some tough spots, and the Rat Pack were too good at Hun killing to leave rotting in a high security prison. In skilfully drawn pages, scores of humble Tommies stood up to the might of the enemy and gained victories against incredible odds. 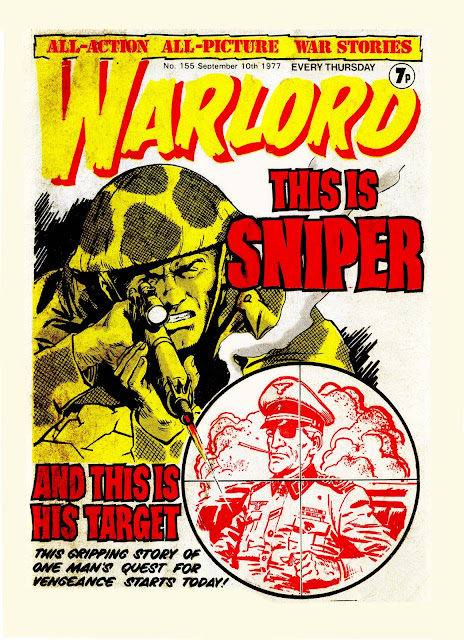 By the time I started reading comics in the early 1970's there was already a rich history of boy's adventure comics - Victor, Valiant, Lion were the hot titles but these belonged to the previous generation and it was newer titles like Warlord from DC Thomson and Battle Picture Weekly from IPC that caught my imagination.Warlord first hit the stands in 1974 and was far grittier than the usual war comics for sale during that period - so successful was it that rival publisher, IPC launched Battle Picture Weekly in order to snare some of the readers eager for this new kind of comic book reader.Warlord was the first UK title to be dedicated solely to war stories, other comics usually contained several genres. And right from the start it set the bar very high in terms of artwork and storytelling.
Below there is a video presentation in which I look through the first issue of Battle Picture Weekly.Battle Picture Weekly, first published in 1975, was launched directly as a result of the success that rival publisher, D C Thomson were scoring with Warlord, and to my mind became far the superior title. With a creative team that included Pat Mills and John Wagner how could it not be! This was the comic that would one day feature a truly ground-breaking first world war strip by Pat Mills, called Charley's War which remains arguably the best war strip ever produced.“Pat (Mills)  and John ( Wagner) wrote the initial Battle episodes and then farmed them out to other writers. GFD ( Gerry Finley Day) was the author of D-Day Dawson. Lofty’s One-Man Luftwaffe –
'That was John and Pat. Their brief was not only to create a new title but bring new talent into the industry. We’d worked with a bed-rock of people. When you launched a new title, you rang up Tom Tully, he would do four of the new strips, Ted Cowan – people of that era – Ken Mennall. A lot of the people in Battle #1 were new to me."  Original Battle Staff Editor, Dave Hunt. Perhaps the main difference between Warlord and Battle were rooted in the British class system. Battle felt working class, while Warlord seemed to be establishment. No better is this illustrated than in the original flagship characters in each title. Warlord had Lord Peter Flint, a wartime secret agent who when not away saving the country, was living the life of a wealthy aristocrat, his pleasures no doubt funded by the tax payer. But Battle's answer to the character was Mike Nelson, a working class bruiser who was billed as Britain's deadliest secret agent. And where Lord Peter Flint believed in giving the enemy a fair shake, Mike Nelson had no such morals - in the very first frame of his first appearance in Battle he shoots a German soldier in the back.Now back in the day I read both Warlord and Battle, but Battle soon became my publication of choice. Where Warlord's heroes would dispose of the enemy with ease and then return home for tea and cakes, Battle's heroes seemed to bleed. The Mike Nelson character would become less important to Battle as the title found its true identity. The first adventure would run until May 1975, and although the character returned from time to time, it was the other strips that became reader favourites. Strips like Rat Pack, about a group of convict soldiers, was a huge success with readers, as was D- Day Dawson and in 1976 Battle introduced a character that became so iconic that he has been re-invented as Cursed Earth Koburn in the pages of Judge Dredd Magazine. This character was Major Easy, created by Alan Hebden and Carlos Ezquerra, a laid back James Coburn lookalike who usually fought the war from a horizontal position.It was in 1979 that Battle finally came of age, with the strip Charley's War which was written by Pat Mills and drawn initially by Joe Colquhoun. Debuting in the landmark 200th issue, this was a different kind of war story. For one thing it was set in the First World War, when most adventure strips tended to favour the second world conflict, and for another it was an anti-war strip.
YEP, AN ANTI WAR STRIP IN A WAR COMIC!!!!'I did not want Battle to glorify war, and Charley's War is an anti-war story," said Mills. "I think that in the 1970s and 80s it was legitimate, more so than it is today, to describe the Great War as a tragedy, a mistake and criticise the incompetence of generals. In 2014, revisionists have been trying to improve the image of the generals." Charley's War is a true work of literature - a harrowing, intricately drawn look at the Great War as seen through the eyes of working class, semi-literate Charley Bourne. Pat Mills took the inspired method of telling much of the story through young Charley's diary. The strip was truly ground-breaking, featuring not gung-ho adventure but a look at the war as it truly must have been. 'A combination of well-researched and heartfelt scriptwriting, Pat’s work is the antithesis of the ‘war is hell’ gung-ho Sergeant Rock-style story. While never doubting for a second the heroism of the brave men in the trenches, The Great War is shown to be the tragedy it was, a meat-grinder that took the lives of millions of soldiers and set the stage for the even greater horrors of World War Two.
The artwork for Charley’s War was provided by Joe Colquhoun, one of comics’ great unsung heroes. The Gustave Doré of British comics, Colquhoun created beautiful expressive storytelling week-in week-out. Both Joe and Pat put their hearts into Charley’s War, and readers of all ages were drawn to the care evident in their work.'We often imagine that Armageddon is a horror that awaits us sometime in the future. But Armageddon has already happened. It was World War One." Pat MillsCharley's War are available as a series of handsome graphic novels from Titan Books.These days the British comic industry seems to consist of 2000AD and a plethora of licenced titles with the free cover gift more important than the stories between the covers, and the days of true variety in British comics is a distant memory - The Spectator bemoaned the lack of a British comic book industry in this article HEREPat Mills can be found hereFor a history of WarlordFor a history of Battle
at September 13, 2021