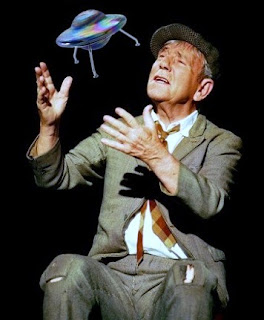 It seems that being dead is no hinderance to Comedy icon Norman Wisdom who could emerge for one final movie adventure, as plans are underway to release a previously un-seen film starring the comic actor.Cosmic Brainsuckers , which was created and funded by Grant Littlechild, was filmed in 1998, but funding is still needed to pay for post-production work. The film stars Sir Norman and astronomer Sir Patrick Moore, with an introduction by Michael Jackson and Blues Brothers director John Landis.The movie sees Wisdom's character abducted by aliens and meeting robots and space maidens.Mr Littlechild, who first began working on the project 14 years ago, said he wanted to mirror the sci-fi comedies he grew up with.: "Who better to star in my own film than another childhood hero of mine, Norman Wisdom?"
Also in the cast are the late Warren Mitchell and Patrick Moore.He added: "I kept thinking how fantastic it would be to see Norman abducted by flying saucers. For me to shout 'Action' and Norman to yell back, 'Mr Grimsdale' was such an incredible experience." 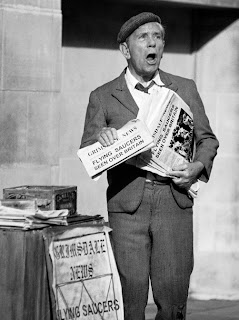 Littlechild is currently looking for sponsors to help fund the post-production work that would allow the feature to be released in cinemas or on DVD. He says: "Since the sad loss of Norman, I passionately now want, more than ever, to see this film completed. He has got so many fans."
Find a trailer HERE
The majority of the film was lensed decades ago and this movie marks Warren Mitchell's last performance as Alf Garnett and although this amounts to little more than a cameo it is something that fans would lap up.
Let's hope this movie finally hits DVD and streaming sites.
at September 01, 2021